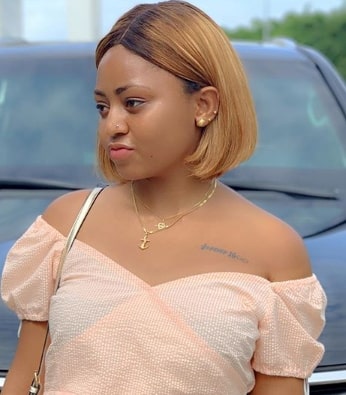 A young man named Opoma Terry (24 years old) whose job is to send life threatening messages to victims for money, has been apprehended by the police.

According to reports, the suspect “Opoma Terry” who just returned from Ghana, operates from Lagos state, where he sends life threatening messages to victims, telling them how he wanted to either kidnap, or assassinate them, if they refused to pay a certain amount he asked for.
He tried to blackmail and defraud Hon. Ned Nwoko (husband of the popular Nigerian actress Regina Daniels), by telling him that he was a hired assassin, who was sent to kill his wife (Regina Daniels).

According to Opoma Terry, he tried to defraud Hon. Nwoko of the sum of #700,000 naira, but he later changed his mind, and decided to open up to him, so he did so, and even went as far as telling Nwoko that he was not an assassin, but a 419 (Yahoo Boy), who just wanted financial help from him, to stop the illegal business.

Hon. Nwoko who decided to play along, asked for the account details of the young man, and sent him the sum of #400,000 naira, but before doing that, he already informed the management of Terry’s bank (Access Bank), and all the security operatives, so Mr. Terry was arrested immediately he arrived at the bank to withdraw the money.

The case is still ongoing, and the suspect is expected to face trial.