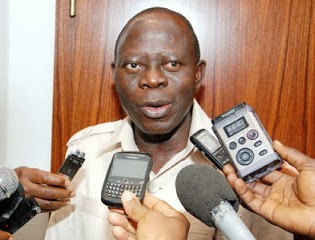 According to rumour mills, the car crash that happened on Saturday the 28th of December, 2013 necessitated Governor Adams being flown abroad for emergency medical treatment.

Oshiomhole denied the rumour during a press briefing on Monday.

Hear Oshio in his own words below:

“It is true that on the 28th December, 2013, at about 10 am, I was heading from my village to Benin City to receive the Vice President who was visiting Uromi to attend the birthday celebration of Chief Tony Anenih. Even though he was on a private visit, I am obliged by protocol to receive him.

“I believe somewhere in Ewu, a bus that was packed with goods veered off its lane and headed straight to my car and hit the car. But for the fact that the car is armored, it would have somersaulted given its impact and the bus driver was clearly on high speed.

“The luck however was that we were not on speed and so it was possible for the vehicles in my convoy to stop, otherwise, all the vehicles would have run into my car and one thing would have led to the other,” he said.

Oshiomhole who gave thanks to God for his survival of the accident, further confirmed that “all of us in the car, my ADC, driver and myself were all having our seatbelts on. The air bags were all activated. Nothing happened to any of us. I still went to the airport to receive the Vice President after the accident.

“They say the devil is a liar. It does not matter what they say. God delivered all of us; none of us was injured in any manner. All those stories about being hospitalized and being under intensive care in an undisclosed hospital are figment of the imagination of those who were parroting the story.

“The important thing for me is that anything could have happened. The driver passed the first three vehicles and went straight to hit the one that I was in. you would recall that on the eve of the campaigns for 2012 election, that same car was the one I was driving and a vehicle in a similar manner came and rammed into a car I was supposed to be in.

“Bad news spread fast. As you can see, in spite of God’s mercy, people prefer to spread false story and construct what they imagine. It is only God who defines who we are and our future,” he added.