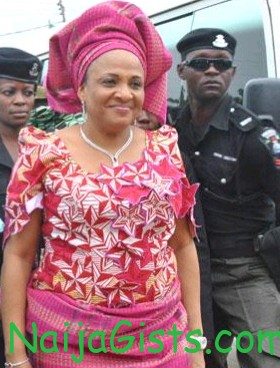 Mrs Florence Ajimobi, the wife of the present governor of Oyo State Nigeria, Governor Isiaka Abiola Ajimobi is currently in a messy scandal after she was allegedly arrested in the London, United Kingdom over a money laundering case. naijagists.com

According to a source, we learnt Mrs Florence Ajimobi was arrested by London Metro. Police with £400,000 and an unspecified amount of US dollars totalling 500 million naira on her 52nd trip to the United Kingdom.

An unconfirmed report claims her husband, Abiola Ajimobi rushed to the London to secure her bail.

Florence Ajimobi who has a house in London is a frequent visitor to the UK. Her house is located in Golders Green area in the London Borough of Barnet in London, England.

Oyo state Governor hasn’t said anything about the story yet.

According to insiders, Florence Ajimobi has been out of the country for a while now but her husband is back to the country.

Florence Ajimobi’s spokesperson, Yemisi Dada said she’s unaware of her arrest however, she promises to find out the correction information.

“I cannot talk about that. I am not aware of what you are talking about and besides, I am not in Ibadan right now. Meanwhile, I will find out the correct situation and get back to you as soon as possible. Thanks”.

Can you imagine that! Where are we going in this country?