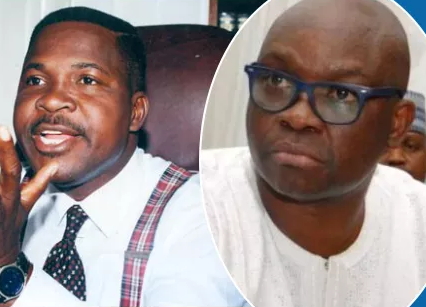 Ekiti state civil servants have come after Fayose for allegedly paying out N75million as a part payment of a legal fee to Senior Advocate of Nigeria, Mike Ozekhome who is currently handling his money laundering case against the EFCC.

In the statement issued by the Civil servant group under the umbrella of EWF (Enlightened Workers Forum), the group said the N75million Fayose paid as “part payment” to Ozekhome is unjustifiable at a period when workers are owed six months arrears of salaries.

The interest group wondered why they are still being owed six months’ arrears after the Federal Government had released N9.6 billion bailout, N8.88 billion and budget support funds for nine months amounting to N10 billion within a space of one year and two months.

They added that Fayose has much explanation to do on how the bailout funds the state received from the Federal government were spent.

The Ekiti State Man of the People as he is fondly called is yet to answer any of their queries.

How can a lawyer collect N75million as legal fee??  This is a clear case of corruption that must be investigated thoroughly.

If care is not taken, these ‘moneticians’ will loot the future of Nigeria haba!!! Una no fear God?