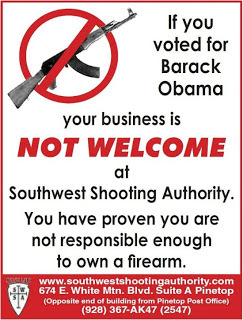 Cope Reynolds, the owner of Southwest Shooting Authority gun store in Navajo county, Pinetop, Arizona recently paid for a full-page ad in White Mountain Independent newspaper with stern warning to people who voted for President Obama to stay away from his gun shop. naijagists.com

According to Phoenix New Times report, the advertisement reads:

“If you voted for Barack Obama you business is NOT WELCOME at Southwest Shooting Authority,” reads the ad. “You have proven you are not responsible enough to own a firearm.”

Obama supporters in the area have yielded to his ad as they stay clear of his gun shop.

The gun shop owner stands to lose over 736 potential customers to his shop.

Guess this guy is trying to gain popularity the wrong way.