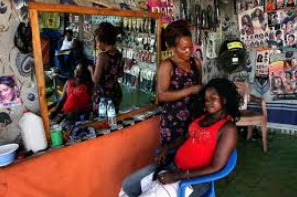 A woman identified as Aishat Akande, who allegedly beat a man with a wire was today docked before an Ikeja Chief Magistrates’ Court.

The accused, an hair dresser, who resides at 7, Somoye St., Ijaiye, a suburb of Lagos, is being tried for conspiracy and assault.

The Prosecutor, ASP Clifford Ogu, told the court that the offences were committed on June 19 at Ijaiye in Lagos.

Ogu said that Akande and others at large allegedly flogged one Mr Sunday Adeko for urinating beside a shop in their domain.

He said that the accused and others allegedly descended on him and flogged Adeko with wire, adding that in the course of beating him, the wire heat Adeko in his eyes and blood gushed out of his eyes.

Ogu said that during police investigation, the accused said that the residents of the area had warned passersby to desist from urinating on the spot because of it’s odour.

He told the court that by the act, the accused and others had taken laws of the land into their hands.

Ogu said the offences contravened Sections 246 and 411 of the Criminal Law of Lagos State, 2015.

The Chief Magistrate, Mr J. A Adegun, granted the accused bail of N50,000 with two sureties in like sum.

Adegun adjourned the case until July 10 for mention.