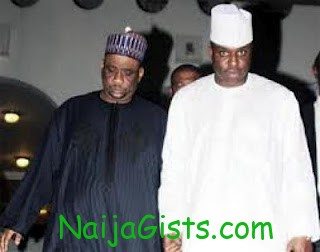 Bankole’s lawyers led by Chief Adegboyega Awomolo, a senior advocate of Nigeria, in an application brought before the court on behalf of the former Speaker and his Deputy for the quashing of the charges slammed against them by the Economic and Financoial Crimes Commission, EFCC, had argued that an account number issued by a bank cannot be said to be a property to be owned or entrusted as alleged in the charge for which Bankole and Nafada are being tried.

He stated that an account number cannot be subject to ownership.

In quashing the charge, Justice Belgore noted that the record increment in members’ allowance by obtaining the N38 billion loan was immoral, wrong and condemnable, especially given the abject poverty to which a great majority of Nigerians have been forced to exist under, but went on to hold that Bankole and Nafada had committed no crime.

The court further held that the the House of Representatives has power to use its funds in ways it deemed fit whether as running costs or enhancement of welfare package and that such discretion exercised by the House over its funds does not amount to a crime.

He further noted that it is the Clerk, not Bankole and Nafada, who should be charged with securing and disbursing the loans.