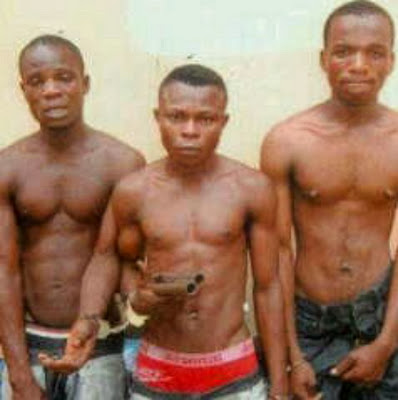 A 21-year-old disabled armed robbery suspect, John Okue, has been arrested by the Delta state police command in a hair saloon in Okwashi-Uku, following a tip off.

The disabled robber, who lost one leg to a virus, led the gang of other brutal robbers whose ages ranged from about 17 to 25 years.

Together, they were said to have robbed, killed and raped their female victims with impunity.

The gang was said to be highly connected to top police officers in the state. Consequently, when any member of the gang was arrested and detained, his freedom was often obtained.

It was reliably gathered that at a point when the police wanted to apprehend him in his home in Kwale, he escaped while he disguised as a begger. The police officers detailed to track him down saw him but never knew he was the suspect they were looking for.

This cat and mouse game between the police and the armed robbery suspect continued for several weeks as he became elusive until recently when the gang leader was apprehended in a barbing saloon at Ogwashi-Uku following a tip-off.

Police sources said confessional statement by the gang leader led to the arrest of other members at different locations.

They are being detained at the State Criminal Investigation Department (SCID) Asaba.