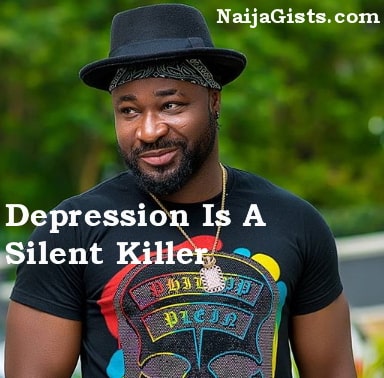 The manager of pop star Harrysong has dismissed reports that the singer used his suicide post as publicity stunt.

In a chat with SB, Mr Desmond Ike Chima said the singer is overwhelmed by some personal issues.

Here is what Mr Ike-Chima said in a phone chat over the week.

“In recent times, Harry has been dealing with some personal matters. We noticed that he hasn’t been the usual Harry and that his energy level was depreciating. We asked him what was wrong but he said that we should not bother because he was trying to deal with it alone.

“What we need to be glad about is the fact that he spoke out. In this part of the world, men are perceived to be very strong species who should not cry when things are going wrong. The fact remains that it takes a strong person to speak out when he is going through emotional stress, especially if he is a male. It was very heroic of him to speak out because now we know it is no longer something he can deal with alone and we have sought help. Now we have got him the needed help. If he had not spoken out, it might have led to something negative and people would make remarks that he could have spoken out. It was very heroic of him to seek help when it was needed”.

“We are aware that at the end of Harrysong’s suicidal post, he put a hashtag with his recent song but it was not a publicity stunt. The title of the song is Tekero, which means I love you. What he meant by putting that hashtag in the post was to show that he loved everyone.

“The problem I have with most Nigerian audience is that they do not tend to take serious things seriously. There is no serious person that would want to use his death as a publicity stunt and if people do it, why should someone like Harrysong do such? It is someone who does not have content that would look for a way to do things that would serve as content for him.

“This man is someone who is doing well in his career; he is one of the busiest artistes at the moment. When he made this post, he had played at about three shows in two days. We were not in Lagos when he made that post. We went for a show in Rivers, Bayelsa and Benin City, Edo State. It was when I was making arrangement for our hotel reservation that he made the post.

“It could not have been a publicity stunt because it is when some artistes notice that there is no more attention on them that they resort to publicity stunt. On Friday, a psychologist, Oyinkansola Alabi, visited him at home to talk to him. It is not a publicity stunt”.

A source told NG few days ago that the singer is battling heartbreak.

Continue Reading
You may also like...
Related Topics:Depression, harrysong, real