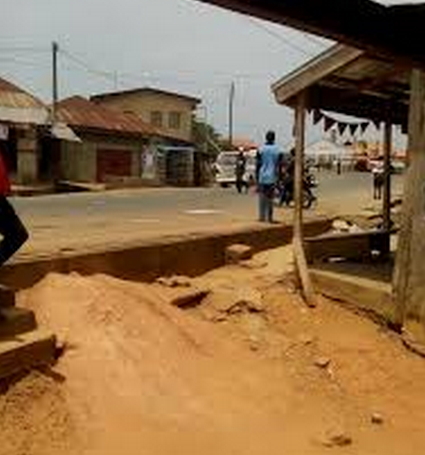 There has been tension in Lara, Igbe community, in the Ikorodu area of Lagos State after some Hausa thugs allegedly slaughtered a 33-year-old resident, Shola Olaide, during an argument.

We learnt that after the killing, which occurred at about 8pm last Sunday, angry youths went on the rampage threatening to kill all northerners in the area, which made Hausa to flee the community.

Our correspondent gathered that Olaide, who was a meat seller, had gone to a shop owned by a Hausa man in company with a friend, identified simply as Biggy, to buy an item.

It was learnt that Olaide, an indigene of Igboora, Oyo State, had met some Hausa men standing at the entrance of the shop, and reportedly asked them to give way.

An argument was said to have ensued between them during which the trader and his friends allegedly dragged Olaide to the back of the shop, and slaughtered him.

The landlord of the house along with other residents were said to have rushed Olaide to a hospital in the area where he later died.

We learnt that angry youths immediately started going round shops and houses where northerners were staying, threatening to avenge Olaide’s death.

The Hausa people living in the area were said to have fled the community that night and the following morning.

It was learnt that the matter was reported at the Area N Command, Ijede, while policemen had deposited the corpse in a mortuary.

When our correspondent visited the area on Wednesday, it was noted that some sheds used by Hausa traders had been razed.

On Alagemo Street where the deceased lived, a neighbour, Mrs Taiwo Akanda, said Olaide was planning to visit his sick parents in Oyo State when he was killed.

She added that since Sunday, all the Hausa in the area had fled as youths vowed to avenge Olaide’s death. She said the deceased was a jovial man, and the Hausa assailants might have misinterpreted him.

She said, “Brother Shola (Olaide) was a meat seller, and he was a very jovial man. On that Sunday, he left house at about 7.30pm, and told his wife that he was going to buy an item in Lara.

“When he got to the shop, some Hausa men were hanging around the shop. So, he asked them to give way. They got angry, and there was an argument, during which they dragged him away and murdered him.

“Initially, the residents that were around tried to save him.But by the time they rushed him to a hospital, he had died. His wife sells food, and theirs used to be a happy family. This is not the first time some Hausa thugs will attack people in this place. That is why the residents are angry with them on this incident.”

Another resident, identified only as Ogunleye, said the government should look into the uncontrolled attacks by the Hausas in the area.

“We do not want them in this community if they cannot learn to live in peace. Enough is enough. Now, they have thrown a happy family into mourning. The man still has parents, who he had planned to visit,” he added.

The uncle of the deceased, identified only as Onimole, said Olaide’s wife, Rasheedat, and their three children had been taken to a house in Ikorodu.

He said, “The family is still young. The eldest of their three children is in Junior Secondary School 1, and the family needs assistance. Olaide’s death was a shock to the family.”