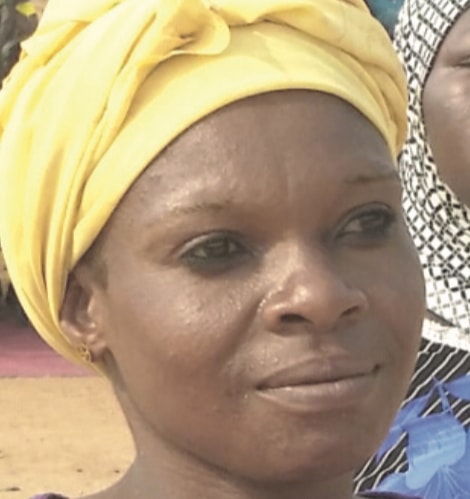 Beginning of a tragic story.
The tragic story started much earlier when Veronica got married, at 19, to Mr. James Hon (now late) from Gwer West Local Government Area of Benue state. The marriage was blessed with one child, a son. But eight months after, Hon died in an auto accident on the Makurdi-Enugu road while returning from a business trip. He used to trade in palm oil. After his death, Veronica summoned up the courage and continued with the business while staying in her husband’s house. But owing to some irreconcilable differences between her and her husband’s people, she returned to her maternal place but still continued with the oil-trading business, with her only son, Simon Hon.

But somewhere along the line Veronica switched to bushmeat marketing business. In her itinerary, she would travel to Awe Local Government Area of Nasarawa state to buy the meat and thereafter sell it to the people of Aliade in Gwer East Local Government Area of Benue State. It was in the course of doing this that she met Sebastian Iorshe, a Tiv man from the area and a love relationship developed between the two. As it were, Sebastian had also lost his spouse two months after marriage in 1998.

So, given the mutual fate and feelings shared by the widow and widower, they did not see any reason not to marry and settle down as husband and wife. They did so about eight years ago. But the marriage ran into a big storm when it repeatedly failed to produce a child or children to cement the relationship. Matters were not helped much with Veronica’s movement into the second marriage with her only son, Simon, now 26-years-old. Sebastian’s mother who is not happy over the couple’s inability to produce children was said to regularly accuse Veronica of using her son’s wealth to train up her own son.

Descent into the abominable act.
But amid the frosty relationship, suspicion, accusations and counter-accusations created by this development, the couple neglected to go for a medical check up to ascertain the source of the problem. Veronica put the blame on her husband. She claims that while she was willing, her husband was not. She said she suspects that her husband, said to be suffering from low sperm count, had, all along, known that he is unable to father a child.

But not too sure of where the problem lay, Veronica decided to test her own virility or potency by luring her son into secret lovemaking (with a stem warning not to reveal the affair to anybody). Investigation by Saturday Sun reveals that the serial lovemaking session lasted throughout the month of March and April 2018. Each time Veronica came down to Lafia with her son to deliver dry meat to restaurants around the area, she would rent a hotel room where she would, time and again, lure her son into performing sexual acts with her. Her reason for doing so she said, was to ascertain whether the fault was from her or not. At the end of April the result came out when she missed her period, signaling that she was pregnant.

But when she broke to her husband, what ordinarily would have been good news, he denied being responsible for it and suspected foul play. Stating February 1, 2018 as the last time they had sex together, he wondered how that would have resulted in pregnancy two months after. He added that if she missed her period at the end of April, then he is not responsible for it. This development led to suspicion that created a big crisis in the family. On 2nd August 2018, both of them submitted themselves to a medical test in Lafia based on the advice of a close relation. The result showed that Veronica is three months pregnant and confirmed the fact her last lovemaking with her husband February 1, couldn’t have led to that.

Matters turned out worse when another test conducted on her husband showed that he has weak and low sperm count that would make it impossible to father a child. The moment these details were released by the hospital, the angry husband, accusing her of infidelity, asked his wife to pack out of his house to go and live with the man responsible for her pregnancy.

Confession and moment of truth.

After persistent pressure from our correspondent, Veronica eventually opened up to tell her own side of the story.

“I am not a loose woman,” she said. “I am just a woman who loves her husband very much and didn’t want to lose him. I did what I did to save my marriage even though I feel guilty about it. It was not easy but I slept with my first son from my first husband so that I could give my husband a child. But rather sustaining my marriage, the plan has scattered it and I have lost it.

“I got married to my husband eight years ago. We had no child. The worst was that I never got pregnant even for one day. When I discovered that I was no longer getting younger, I was worried as much as he and his parents were. His mother became so impatient that she started breathing down my neck as she gave me no breathing space at all. She said that I was cheating on her son, using his son’s money to maintain my son, that I’m older than his son.

“She moved in to live with us and practically made life in my matrimonial home unbearable for me. At a point, she stopped talking to me. The only time she would talk to me was when she wanted to insult me and remind me of how less a woman I was. I was confused, more so when my husband refused to submit himself to a medical test to ascertain the source of the problem, though we loved each other before the heavy pressure from his mum came. We used to have serious lovemaking sessions especially during my ovulation period all in the bid to get pregnant so that my mother-in-law could stop humiliating me. Yet, I couldn’t get pregnant. I started suspecting the problem could be from my husband when he refused to subject himself to medical test. But the insult from my mother-in-law was getting too much, too unbearable for me. She vowed to frustrate me out of her son’s home. To make things worse, she sent away my son saying that he has no business staying in the house. I had to look for a one-room apartment for him in Lafia.

“After he left, it was just three of us in the house in Awe, which is a distance away from Lafia. I was always terrified each time I heard her voice from a distance. She tried to frustrate my meat market in Awe. In fact, the only time that I had peace was when I went to the market. It is so agonizing to say this. Instead of testing someone else to ascertain my fertility, I seduced and slept with my son. Simon is a young man in his early 20s; he has not started sleeping with women before I lured him into making love with me.

“I started by buying good things for him, sleeping together on the same bed, playing with his manhood and gradually one thing led to another. There was a time I asked him if he had tested sex before and he said no. I compelled him to take an oath not to disclose it to anybody. I said I would teach him sex. I ensured that I did that during my ovulation period. I never disclosed the reason for this but deep in my mind, I wanted to test my fertility. I planned it during my ovulation so that I could get pregnant, although it was not easy sleeping with a son. I knew I was doing the wrong thing and betraying my husband but I saw it as a necessary action to save my marriage. I didn’t want to go out sleeping with another man outside. I knew it was wrong but I prefer it from my son than a man outside. After one month, I discovered that I was pregnant.”

Picking pieces of a broken life.

Now that the deed had been done and her husband had sent her packing from matrimonial, you wanted to know what she was going to do. She responded that she would do nothing else but piece together the pieces of her broken life and move on. She would relocate to Markurdi, she said to continue the dry meat supply business with her son. But how about the pregnancy, you managed to ask. Is she going to abort or keep it? Though she regrets her action, she said, she had decided to keep it because “it is blood within my blood.” Saturday Sun understands that when the heat became unbearable, Veronica asked her son to relocate to Benue State to avoid unforeseen circumstances.

Speaking on the issue Sebastian expressed his disappointment over his wife’s betrayal and vowed never to forgive her. “I don’t want to believe the story she is narrating to you that her son is responsible for it, though I have not suspected her or seen any sign that an outsider was dating her,” he said. “But the truth is that I’m not responsible for the pregnancy and will not allow her into my house. It is a shame for me to be associated with a mess like this. Please, I don’t want to talk about it anymore; she is no longer my wife.”