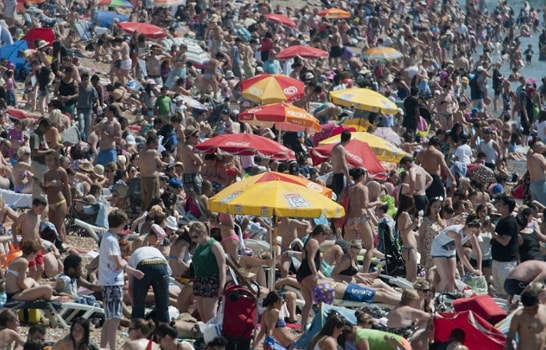 Britain recorded its hottest day of the year on Thursday, as a report warned that a heatwave blamed for more than 2,000 deaths in 2003 could become a summer norm in the country.

“It’s officially the hottest day of the year so far! Charlwood in Surrey has reached 33.9 degrees Celsius – and we’re likely to see hotter yet,” tweeted the national weather forecaster, the Met Office.

The weather forecaster said earlier that it expected temperatures to peak at about 36 degrees Celsius in south-eastern England, which would exceed the 2017’s high of 34.5.

The Met Office said some parts of Britain have recorded nearly 60 consecutive “dry days,” with less than 1 millimetre of rainfall, but heavy rain is forecast to bring relief to some areas from Friday.

Britain’s all-time record of 38.5 degrees Celsius was set during the 2003 heatwave, with similar hot spells likely to become common by the 2040s, according to a report by lawmakers.

The average number of heat-related deaths is expected to reach 7,000 annually by the 2050s, partly because of an ageing population, said the Environmental Audit Committee of parliament’s elected main house, the Commons.

Despite recognizing the severity of the risk, “the government fails to give leadership on planning for the effects of heatwaves on public health; social services; and critical national infrastructure such as transport, digital systems and water supply,” the report said.

“The government must stop playing pass the parcel with local councils and the National Health Service and develop a strategy to protect our ageing population from this increasing risk,” Creagh said.