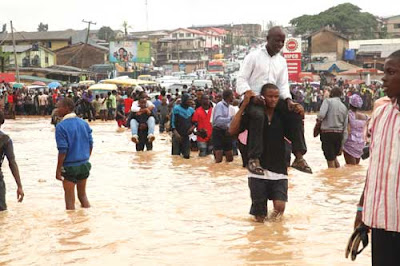 Several resident of Ogun and Lagos states couldn’t make it to their business today as the 2 major southern states were hit with severe flooding due to heavy rainfall this morning.

According to sources, popular areas of the two states were flooded while properties were swept away by the flood.

The heavy rainfall started at around 2 a.m till this morning.

This has forced many residents to stay indoor while others who took the risk to leave their houses either got stuck at the various bus stops or had to trek to their destinations.

3 Swept Away By Lagos Flood

It was further gathered that three people were swept away by the flood.

Residents who lamented the situation said it took them hours to even leave their homes for work this morning while many were still stranded along major roads at the time of this report.

At the Adekunle Fajuyi area of Ikeja, GRA, Lagos, it was learnt that the storm destroyed an electric pole which resulted in the electrocution of one person, whose identity is yet to be ascertained.

As at the time of this report, the pole was still lying across the road with the corpse of the victim on the ground close to it.

Also at 2 Community Street, Iyana-Oworo area of the state, the flood was said to have brought down a one-storey building, which resulted in the death of one person while several others have been hospitalised.

A one-storey building, which collapsed, fell on a building behind it instantly killing a carpenter whose name was given as Ahmed Sotuminu.

It was learnt that a friend of the deceased who slept in the same room with him, as well as a pregnant woman called Bose, and her sister, Bunmi sustained injuries and have been rushed to the Gbagada General Hospital.

At the Aboru area of Agbado Oke-Odo Local Council Development Area, not less than 50 houses were flooded.

At Alabede area, many residents were forced to roll up their trousers, skirts as well as remove their shoes in order to wade through the flood successfully as buses and motorcycles refused to convey them beyond that area.

Many residents of the affected areas could not go to work. Primary school pupils in the area were equally asked to stay at home by their parents.

Some of the residents who spoke with P.M.NEWS expressed their displeasure at the sad development, saying the government is not doing enough to alleviate their plight.

According to Pa Salimonu Tiamiyyu, a resident of Fatai street where about 20 houses were flooded, “the rain actually started at around 12am and once it is raining, there is no sleep for residents of this area. The owners of those house mostly affected always leave their buildings in order not to be caught unawares.

“The major causes of this problem is that the drainages channeled to this area are too many. The flood comes from Abattoir, Abule Egba, Meiran, Sango, Agege and its environs. It is as a result of these problems that we are having much problems here. Sometimes rain will not fall here, yet we will experience flood.

According to Sherrif Seriki, “we don’t usually experience this kind of development since 2000 that I have been residing here. This issue of flooding started around July last year and it has claimed many lives. When the rain started early today, we had to do what we are doing to save those houses affected by the flood so that people won’t drown.

“What we want the government to do now is to bring additional dredging machine to this end to make their job easier. The canal has been widened right from Pleasure bus stop at Iyana-Ipaja and its very narrow at our end here. Therefore, our end here couldn’t contain the force of the flood coming from there. I think this was what was responsible for the heavy flood this morning,” he said.

At the Alagbole-Akute areas of Ogun State, it was a harrowing experience for residents who came out from their houses as they were totally cut off from Lagos where many of them work.

“Some boys in the area saw it as an opportunity to make money and they ensured we paid N100 each for them to carry us on their backs and shoulders,” one of the residents of the area told P.M.NEWS.

Another resident of the area, who is a banker, called today the worst day of her life. The lady, who gave her name as Anthonia said she was soaked in the flood.

“I had to lift up my skirt. In fact, I was totally naked and soaked to my pants,” she said, adding that she would have to buy another underwear before getting to the office.

According to pm reports, many other residents of the area also gave sordid tales of their experiences just like Anthonia, with some stressing that they did not bother about at their nakedness as long as they could cross.

“My office would not want to hear that you stayed back home because of the flood,” said Abimbola, a staff of a construction firm. I don’t want to incur management’s wrath. So I have to get to the office any how I can.”

The two filling stations in the area were flooded while the Odo-Eran bus stop area was shut down.

The tail end of a bridge linking the Ojodu-Yakoyo area, in Lagos, to the Alagbole-Akute community, under Ogun State, was today submerged by flood, preventing motorists from going out, after a night of torrential rains that lasted well into this morning.

Flood water, streaming from a blocked nearby river, filled the sloppy road, making it impassable for motorists heading for work and school children.

A resulting traffic snarl stretched back into the interior Akute, and Ajuwon, and an alternative road linking Iju-Ishaga, with scores of motorists trapped in the gridlock.

Some vehicles that tried to brave the knee-length pool of water on the flooded route packed up in the flood.

Two filling stations built near the flooded portion, Oando and NIPCO also came under water, with their fuel pumps and entire premises submerged.

Youths in the area quickly cashed in on the confusion by conveying willing persons on their back through the flood water for a N100 fee.

Commercial motorcycles, Okada, and commuter buses trapped on either side of the bridge also made brisk business by doubling their fares.

A wood seller at a sawmill close to the flooded road lamented the negative effect the situation on his business. “I just wish Amosun (Governor Ibikunle Amosun of Ogun State) will come and see for himself what we are facing now,” said the businessman.

The flood, also experienced during last year’s rainy season resulted from a nearby river that has become blocked by rubbish dumped inside over time.

The flood water is also believed to have sacked many homes in the neighbouring Oke-Ira community, in the Ojodu LCDA, Lagos, especially buildings close to the blocked water channel.

As at the time of this report, residents of Glory Community of Isheri-Olofin, Egbe-Idimu LCDA were still wallowing in the flood and calling for the state government’s attention.

The flooding of the area, which they said started since seven years ago, got worse recently with the diversion of a drainage channel to the area by the Chinese Construction Company, CCECC, during the construction of the LASU-Iba Road. They claimed that they had sent series of letters to the authorities over their plights to no avail.

“Today, some of the houses in the area have been flooded and residents are running for their lives. Properties have also been destroyed as I’m talking to you now,” a resident of the area, Sola Fasima said.

Residents of Matogun also described the experience as traumatic as the flooding of their area has been worsened by the collapse of a facility belonging to the Federal Airports Authority of Nigeria, FAAN.

“The walls of the aerodrum located close to the area collapsed and this is the result of the flood in the area. Many people are currently trapped,” said a resident of the area.

Araromi Quarters of Akanimodo was flooded and children could not go to school.

In Ijoko, residents were stranded and the train could not convey commuters to work in Lagos as it was learnt that the Agbado station had been affected by the rain. Many of the residents had to trek long distance to get vehicles.

Residents of Surulere, Idiaraba, Fadeji and Mushin also faced serious problems. The situation was said to have resulted in serious traffic jam in the area.

Workers living in Sango, Ota, Onhale, Iyana Iyesi, Agbado, had a hectic time getting to their offices as a result of the massive flood at Owode and Joju junctions which prevented movement of vehicles.

This stretch of the Abeokuta-Lagos road was totally impassable. Commuters had to disembark from the vehicles to wade through the floods while those who could not, terminated their journey and returned home.

Many houses and vehicles at Owode junction were flooded.

“Some of us coming to Lagos removed our shoes and rolled up our trousers to wade through the flood at Joju junction.

“After wading through the flood, then we began the long trek from Sango to Toll Gate where we boarded vehicles coming to Lagos. Even then, there was gridlock at Ijaiye, Meiran and Agbado. We spent an averge of four hours on the road before we got to Pen Cinema, Agege.

The Abeokuta-Lagos expressway at Ajala bus stop also caved in, preventing smooth vehicular traffic. Motorists had to slow down when they get there thus causing massive gridlock on the road.” The residents of the area have cried out to Governor Ibikunle Amosun to ensure the construction of the roads and drainages in the area. (@pm)