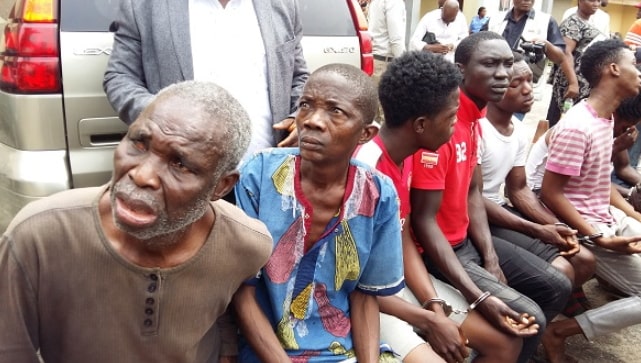 By Precious Igbonwelundu , The Nation

Babatunde Rufai, an 82-year-old herbalist and 8 others have been arrested by the police in Lagos following last week’s murder of Sergeant Collins Esiabor.

Sergeant Esiabor was lynched on August 29, by suspected members of Aiye cult at Ifako-Ijaiye who were said to have protested the death of their colleague.

According to Police Commissioner Imohimi Edgal, the herbalist was found to have treated a self inflicted gunshot injury on one of the suspects, who mishandled an AK47 rifle the mob seized from the police Sergeant.

He said Rufai took part in the lynching of the cop adding that both men were official native doctors for the cult group and usually treated members’ gunshot wounds without reporting same to the police as stipulated.

Although Elegbede denied the allegation, Edgal said he partook in the treatment of the injured member, said to have fled to Ondo State and concealed the information from the police.

“On August 29, at Haruna Bus Stop, Ifako-Ijaiye, Ogba, a mob, for no good reason and without any provocation whatsoever, attacked a police team and vandalised a patrol van stationed to provide security in the area, leading to the death of Sergeant Collins Esiabor.

“I promised then that the command will do all it can to unravel and prosecute those behind the dastardly act. Investigation launched into the incident led to the arrest of 10 suspects.

“The suspects are cultists as attested to by one of them, Ayo Adeyanju, who conveyed the corpse of their late member to the burial site. On their way, they decided to avenge the death of the deceased on the police patrol team even though it is clear that the police had no physical contact whatsoever with the deceased.

“Meanwhile, two native doctors, Babatunde Rufai and Ariyo Elegbede, mentioned as accomplices to the group were also arrested. Recovered from them are a dane gun and assorted charms,” said Edgal.
Continuing, the police boss said those arrested would be charged with murder, adding that efforts were on to arrest other fleeing suspects.

“Those guys confronted the police and seized an AK47 rifle from the policeman. They did not know how to operate the gun and so, one of them mistakenly shot himself on the foot with the rifle.

“These are the babalawos who they went to for treatment. They are official babalawo for the cult group. So, anytime they have gunshot wounds they go to them for treatment and these men conceal the information from the police.

“Besides, they live in that neighbourhood and heard what happened to a policeman yet they never told us about a gunshot victim they treated until investigation implicated them.“