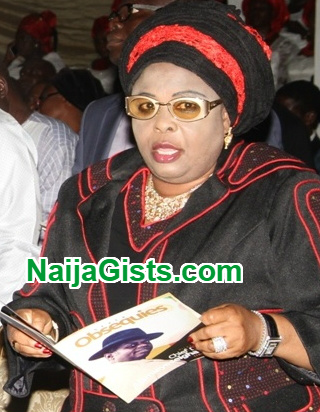 Federal High Court Lagos has freezed all the bank accounts of former First Lady Patience Jonathan suspected to be proceeds from crime.

The presiding judge, Justice Mojisola Olatoregun, while granting the order freezing the accounts ordered the Economic and Financial Crimes Commission (EFCC) to file an undertaking in relation to damages payable by it if it turns out that the order should not have been made.

This is sequel to a further affidavit in support of Ex-parte originating summons sworn to by Mr. Abdulahi Tukur, an EFCC operative and filed before the court by EFCC prosecutor, Rotimi Oyedepo requesting the court to urgently direct the managers of the bank accounts contained in the schedule filed with the summons (FHC/L/CS/1343/16) to, in the interim, forfeit the money in the accounts, to prevent further tampering with such.

The EFCC said it carried out analyses after receiving an intelligence report, which showed that the accounts ought to be investigated.

As such, Mr. Tukur averred that it would serve the course of justice to grant the application for such.