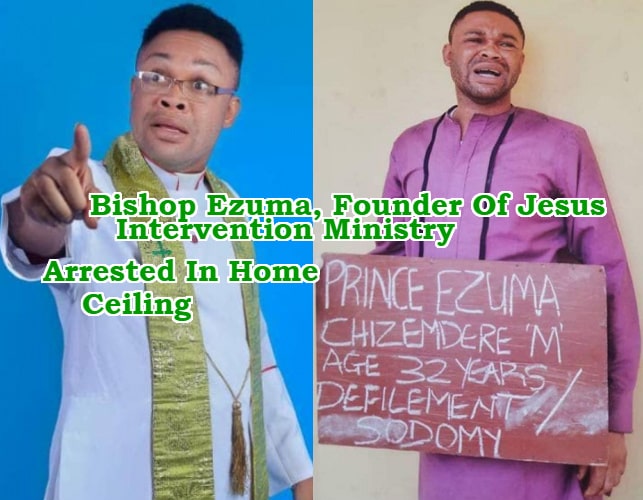 Founder of Jesus Intervention Ministry In Police Detention For Sodomy

Exactly 3 months after he was declared wanted, a self-styled Pastor, Prince Ezuma Chizemdere has been arrested in Lagos.

He was picked up on the ceiling of his home on the 21st of March 2019 around 1am after 2 hours of hiding.

Ezuma, the founder of Jesus Intervention Household Ministry in Ejigbo was arrested at his residence after an informant notified the police he had resurfaced.

It was gathered that the suspect climbed his ceiling where he hid for over two hours to evade arrest when detectives from Ejigbo Division stormed his home few days ago.

He was however forced out of the ceiling after the policemen that went called for reinforcement in order to drag him out of his hiding place.

Ezuma was declared wanted after an alleged male prostitute Prince Chinecherem was arrested and charged to court after a 16-year-old victim Anthony Ikem made revelations that implicated them.

Ikem, who was found sneaking out of the suspect’s home with a polythene bag containing used condoms and other items, was accosted by neighbours and he confessed he was one of several sex partners of the pastor.

Ikem, according to the police, also confirmed that the Ezuma usually gave them to service some of his male clients including VIPs.

On the strength of his confessions, the teenager was taken to the hospital for checks and it was discovered he was HIV positive, a status Ezuma was alleged to have lived with for over three years.

It was gathered that some residents of the community were worried he was corrupting their male children and initiating them into the club, hence, their keen interest to see that he was arrested and prosecuted.

Findings revealed that Ezuma was moved to the Gender Section at the Police Command Ikeja yesterday afternoon, following pressure from certain quarters in the division to release him.

In his confessional statement to the police, Ezuma claimed he usually paid the boys N2,000 for sex.

“He has been on the run for about three months while concerted effort was put in place towards tracking him down. On March 21, around 1am, information was received that he had sneaked back into his compound. The reverend was eventually apprehended after he hid himself in the ceiling for two hours immediately he sighted the police.

“Reinforcement was requested and he was brought down from the ceiling. Investigation showed that he brought about 15 boys into his apartment where he forcefully penetrated them all through the anus.

“There is information that he used to wash like six bed-sheets daily whenever he brought in young children suspected to be his sex partners.