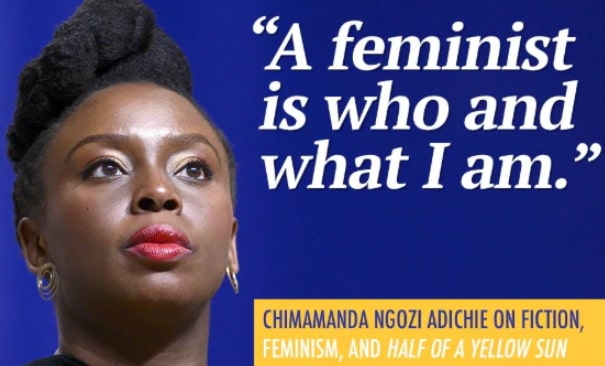 How To Curb The Rise Of Bitter Feminists

Feminism is the belief that men and women should have equal right and opportunities as men. Unfortunately in Nigeria, it is rather a shameful thing to express such belief. Perhaps, because it is perceived as an association of bitter and frustrated women or it just irritates the ego of Nigerian men to be asked to treat a woman equally including their wives.

From the beginning of time, they have been called different appalling names: schemer, temptation, devil, kitchen manager, home maker, weaker vessels and sometimes nicer names like helpmate, soul mate, gold etc. all these still refer to the same person: “THE WOMAN”. Only very few people see her in the latter category.

Most religions and culture are actually more in support of the former category than the latter, the narrow minded call her; the architect of the tragedy at garden Eden ignoring the fact that man was not forced to eat the forbidden fruit. My culture will say “obinrin le esu” meaning the woman is a devil” one religion believes her body is a great temptation to the opposite sex, so she has to cover every part including her face if necessary.  She is only free from this obligation when she is with her husband.  Another religion does not permit her to speak or ask questions in the place of worship, if she has any question she should go home and ask her husband; ignoring the fact that her husband may not be spiritually inclined. While one can’t question the reasons behind these beliefs, one can appreciate the main purpose of her existence.

The woman as an object of temptation

God, I believe, will never create anything that we will deliberately make man sin. Whatever makes you sin started from an idea you had in mind. Even the Holy Bible says “each one is tempted when he is drawn away by his own desires; a desire when conceived gives birth to sin”. From the beginning of the world, man has always turned the good things God created to evil he would always have an excuse, won’t he? I think the notion that a woman is a temptation should be disabused; we can keep on fine tuning our lives to suit others. If a man does not want to be tempted he should not take the second look. There are men who have slept with their daughters what are we going to do to that? Ban a man from living at home with his daughters? What should we do to money? The father of temptation! While everyone has the right to their beliefs, I strongly disagree with the assertion that a woman is an object of temptation.

Not to talk in places of worship

While some sects still strongly hold on to these beliefs, some have decided to allow the Supreme Being take its course; that speaks for why we see women mount altars today. Imagine what could have happened if the late Pastor Bimbo Odukoya was denied this privilege, how many marriages would have crashed or wrong ones built? She would have died with too much God given potentials. Foursquare Gospel Church International was founded by a woman; this church has spread to many nations of the world. A commendable feat I must say! But I think that aspect of the scripture was probably influenced by the custom in practice then; a custom that places women at the mercy of men.

In first world countries where the orientation of men seem to be a bit enlightened especially on the issues regarding women as minister of food affairs in the kitchen. (Although I am not in support of the woman who doesn’t know how to cook) I think a man sharing the cooking with his wife is a lovely thing to do. We have heard of men who are better cooks than their wives. This might not have been discovered if those men were kitchen freaks. The earlier we discover and accept that some women are not talented in the ministry of food and stomach matters, the better. Men should not use the excuse that their wives are not great cooks to flirt around with other women; they could be the saviour of the home in food relating matters. Oddly enough, such women could be great bargainers especially when buying food items thereby cutting downs expenses.

This name could fit into the second category of names a woman is usually addressed as; NICER NAMES but unfortunately the word “home maker” is used more in the negative perspective. Home maker is a subtle word for housewife. The widely known perceptive of a woman has a home maker involves child bearing and rearing, washing, cooking etc. that’s a fulltime job to me. Instances have been cited that when some women ask for help with changing of diapers or assistance with the house chores, men do say “that your job” I believe the word “home maker” should be used to describe a woman who has successfully turned a house into a home, not as a modern slave.

This term originated from the bible, where Peter advised husbands to give honour to their wives as to the weaker vessel. Unfortunately the first part of that sentence is always discarded in our society today, men rarely take about the giving honour part, and they seem more concerned with the weaker vessel part! You hear things like “women are weaker vessels” Period!

But the main question is, is she really weak, if yes, how? If no, why?

I am not a theologian, but I think that the metaphor “weaker vessels” as used by the Holy Scriptures deals more with emotions not physical strength or intellectual strength.

Why she is not a weaker vessel

She issues out blood every month and still goes to work, even when she is pains. I know of men who pass out after donating 3 pint of blood.

She goes to work like every other man yet she still finds time to put the house in order, differentiate and understand the likes and dislikes of her kids and balance it up. This implies that a woman usually knows what food, colour, clothes, teacher, friend their kids likes or dislikes before the man.

She makes sure that the family does not go hungry no matter the amount of money left in the family’s purse. She is the best business administrator and accountant though untrained.

She accommodates the seed of the man, nurtures it for nine months even when she feels uncomfortable, goes through the pain of bringing it into the world. As if the trauma of nine months is not enough, she has to endure the trauma of changing diapers, waking at night at the tiniest cry of the baby. This she must endure for some years. Do you still call that weak?.

She receives the blame for not: having male children, giving birth on time, allowing the husband to send money to his family, even when the man does not have, training the children well, knowing who damaged the home appliances amongst the children.

She is sacrificial. She abandons her career, her dreams and aspiration for the sake of peace in the home. Most men say they want their children to be well taken care of, so they ask the woman to resign from her job. Directly or indirectly this decision has killed her dreams. Her desire to be creative and productive with what she went to school to study has been swapped to that of a nanny. A great price to pay!

She is spiritual, always interceding for her family. She is the majority in the place of prayer and if situation warrants she could also be found in the house of a traditionalist.

Unfortunately, she is not respected in and out of her home. She is still treated as a second class citizen whose opinions should be unvoiced.  In relationships, she is easily discarded then stranded while the one who discards her gets a replacement almost immediately! And you think she wouldn’t be bitter?

Gone were the days when men were the centre of attraction in the society, when rules made for men where more lenient than that of women. Now, women drive cars, work, manage businesses and organisations etc. these they do so well that the adage “what a man can do a woman can do better” became realistic.

While, the masculinity of the male gender is recognised, respected, appreciated, admired but not envied by the opposite gender, it is necessary that the human male species should do the same, by helping out, being supportive, appreciative and loving the women they’ve got without conditions. If these can be done, bitter feminism will die a natural death.

I look forward to a society that will recognise the woman as a partner not a second-hand citizen; a society where men will take responsibility for falling into sexual lust without blaming it on the women. A society where a woman deficiency in the kitchen will be ignored and lovingly corrected by the talent of the man who discovered this skill the day he prepared breakfast.

Continue Reading
You may also like...
Related Topics:bitter, feminists

Jide Sanwo-Olu: The Incoming Tinubu Boy
Atiku: A Desperate Politician With An Ambition To Grab The Ripest Peach