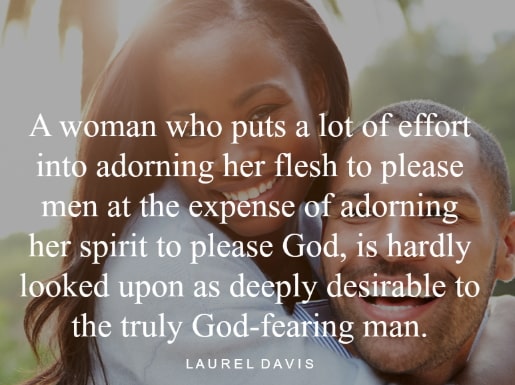 When trying to get a God fearing woman to marry, you have to know where to look. A truly godly woman cannot be found in just any crowd. It is not enough for a woman to claim to be God fearing her character and personality has to truly reflect her claim always; as many ladies have been known to put up an act of godliness in order to gain the interest of men.

How To Find A God Fearing Woman To Marry

These are some of the ways to go about finding a God fearing woman to marry.

If you are not one to go to church that should probably change when seeking a godly woman to marry. People go to church for all sorts of reasons and you find all kinds of people in the church, True. But the church still remains one of the most likely places to find a God fearing woman. Several single ladies hide their real nature under the guise of religion so you have to be careful of such women. But amidst the crowd of pretentious ladies you will certainly located one of the real God fearing ones if you look diligently enough. Seek out a church where the truth is being preached; a bible believing church where the real gospel is being taught in accordance to the word and genuinely join this congregation.

To get a God ordained wife you have to ask God to bring her your way. Ask for directions and guidance in locating and recognizing your God ordained woman. It is not enough to go after just any God fearing woman, but compatibility and character blend of both parties is also important when building a solid union. So pray and enquire of God answers don’t come until you ask.

Don’t just be a member of a good church you also have to be dedicated to serving God and building a solid relationship with Him. A genuinely God fearing woman will have no business with you relationship wise if she senses you are not godly.

Every godly woman dreams of an ideal partner and the number one quality of her ideal partner will be a man who is also God fearing. The same way a man will seek out a God fearing lady is the same way a godly lady will seek out a godly man. So put in effort into genuinely getting to know God and doing his bidding. Your sincere relationship with God will also aid you in finding the right lady. Again, a truly God fearing woman will not look your way if she feels your relationship with God is lacking.

Focus On What Is Within

The outward appearance is the major focus of most men this often leads to wrong choices. Having a picture of the physical look of your ideal woman is wonderful. But don’t be totally focused on what is on the outside that you forget about what lies within. You may be quick to assume that because a lady appears pretty and seemingly godly on the outside this should mean she is the same on the inside.

A God fearing woman may look a little differently from your regular woman being that she may not be quick to show a lot of skin and such or be too focused on looking as flashy as you expect. Therefore finding such a lady requires you set your sights on the beauty within; because physical beauty is shallow, the true beauty and virtue of a Godly woman comes from within.

Outward appearance is superficial a good woman can only be discovered when you look inside. When you eventually find a God fearing woman do not beat around the bush, don’t play unnecessary games be straight. Understand she is not a mind reader so be as clear as possible when making your intentions known.

Expressly define what you want and the kind of relationship you are after and know your stand to avoid undue complications or confusion.

Being godly and going after a God fearing woman is good; however you should strike a balance. Invest time and energy into properly preparing yourself for a relationship and marriage as a whole. Learn and educate yourself on what these relationships truly require to be successful.