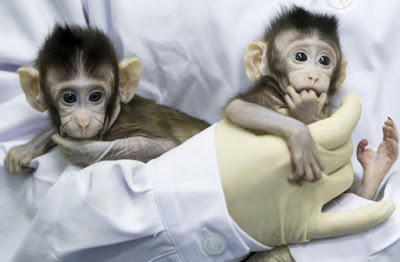 When we thought we had seen the heights of innovations in science and technology, scientists in China have successfully cloned two monkeys.

China, in its aggressive bid to become the leader in science and technological innovation, have resurfaced with another groundbreaking creation – the cloning of monkeys in methods similar to the first cloned animal by scientists in Scotland in 1996 – Dolly the sheep.

In times past, there have been scattered successes in the cloning of mammals like mice, sheep and cattle; however, the cloning of monkeys which is the closest primate to human had proven unsuccessful. Most of the failed experiments produced poorly formed monkeys or cloned monkeys that died moments after their birth.

The cloning of these identical monkeys, which is the biggest breakthrough in science at the moment have generated a groundswell of public opinions, praises and condemnation in every quarters.

We are tempted to reason that the implication of this scientific success is that human cloning is now theoretically possible; one that might be perfected in few years to come.

For the open-minded and science enthusiasts, it is a welcomed development; for the cultural and religious, it means crossing the line in the limits of God’s expectations for man. To them, man has begun to play God, which is a very sad development.

According to Muming Poo, a co-author, who directs the Institute of Neuroscience at the Chinese Academy of Sciences Centre for Excellence in Brain Science and Intelligence Technology, “the technical barrier is now broken. In principle [this method] can be applied to humans”.

Although the reason behind the monkey cloning program might not sit well with many in the scientific community who have raised concerns about animal ethics, Muming Poo however said that the cloned animals are to produce animal models useful for medicine, for human health; there is no intention to apply this method to humans.

According to him, the ultimate goal is to clone monkeys on a large scale for use as test subjects because of their similarities to humans. These monkeys will be given specific diseases before they are born; this way, they can be used to test various treatments. 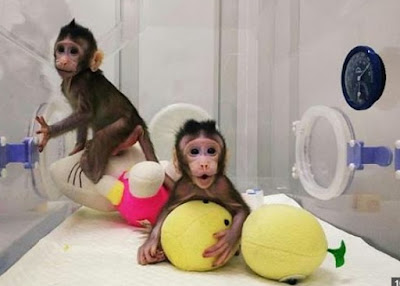 It is not surprising that China is becoming a forerunner in science and technology, as it has almost doubled the number of its local universities in ten years and is heavy on state-funded research incentive programmes.