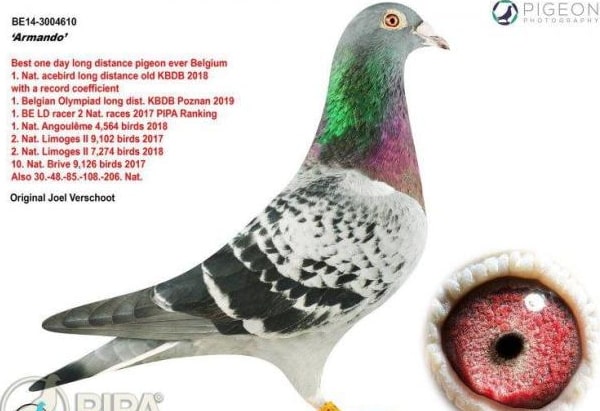 An Olympic Pigeon named Armando was sold for a whopping $1.4 million in an online auction.

The fancy bird is known to be Belgium’s best long-distance racer of all time. He was snapped up by a Chinese buyer.

“Earlier this week it became clear that Armando would be the most expensive pigeon ever sold in an online auction,” wrote specialist website Pigeon Paradise.

“However, no one expected that the magical cap of a million euros would be pulverised,” it added. The final amount was 1,252,000 euros.

Joël Verschoot, who was Armando’s owner, told the Guardian that the record-breaking sale price was “the crowning glory of all those years in the pigeon sport.”

5-year-old Armando is now happily retired and has already fathered a number of chicks. They are sure to come out just like their daddy and be the face of pigeon racing for years to come.

Armando’s last races were the 2018 Ace Pigeon championship, the 2019 Pigeon Olympiad, and the Angoulême. He came out on top in all of them. A hen is currently waiting to breed with him in China!.

Footballers Birthdays In December..Soccer Players Born On Christmas Day & Other Days Of The Month
In Picture: Assisat Oshoala Poses With Lionel Messi To Excite Fans