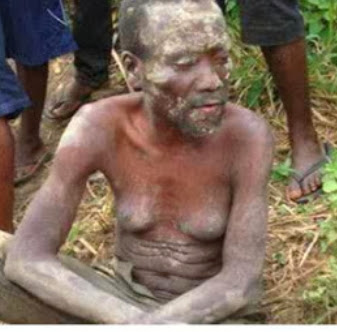 A 70-year-old grandfather has made one of the most shocking confessions of all times in Ghana.

The man who gave his name as Charles Atta is a self-proclaimed Wizard who uses his grand-daughter’s breasts at witches and wizards meeting at night.

He was caught on Wednesday at a river banks in Kaimebre, a community very close to Kasoa New Market in Ghana.

Charles Atta who looked very weak and bore protruding breasts like that of a teenage girl
was found by two brothers Innocent & Libert Obeng.

The brothers said they found the strange-looking man in a very helpless situation crying for help.

His body was covered in mud from the river banks.

The two brothers told Daily Guide reporters that the self-acclaimed wizard confessed to them that he was in the company of colleagues, including a medical doctor and were flying to Cape Coast for a meeting when he was forced down.

According to him, they were flying over a church where an all-night vigil was being held when he crash- landed at Servant Kings International School.

“When we asked him where he was coming from, Atta told us that he was from Akuapem Akropong but was flying to Cape Coast to attend a meeting for witches and wizards,” he said.

Charles also confessed that the two puffy protrusions on his chest were breasts taken from his 16-year- old granddaughter and that he normally borrowed them for his night activities.

The two brothers said they were initially confused and bewildered by the weird sight of the man, and not knowing what to do him took him to Pink FM, a local radio station at Kasoa for help.

When the strange announcement was made on radio, hundreds of people besieged the premises of the radio station to see the suspected wizard.

Upon hearing the news, the Kasoa District Police dispatched a number of police personnel to the station to save the victim from being lynched.

Superintendent Samuel Tabril Punobyin told the paper that the police did not investigate spiritual matters and that the suspected wizard could therefore not be charged.

He said the police would look for the family of the man and hand him over to them. Charles Atta is still in the custody of the Kasoa Police.

Lord have mercy what kind of life is this, a grandfather borrowing his grand daughter’s breasts at night.

TB Joshua: “90% Of Nigerians Believe My Church Is Fake & Demonic“
Photo: Nigerian Politicians Before & After Election