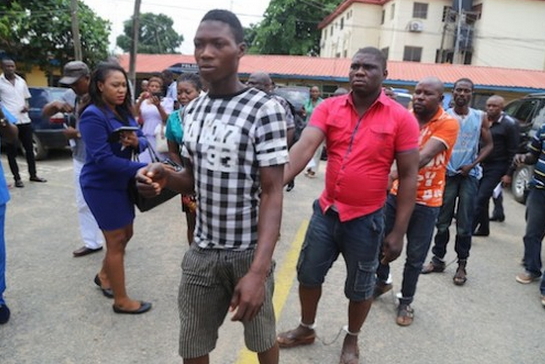 “The Wednesday, June 24, 2015 robbery was shocking. We’re all scared. I thought the end had come. The robbers were many. No one knows exactly their number. I only know there was a lady among them. She wore a lot of things round her neck. I believe they’re charms. It’s like a dream. They were devilish in their conduct. The only thing was that they didn’t shoot anybody but if the policemen had come out that day, only God knows how many of the policemen would have been killed because the type of guns these guys paraded were first class. They started shooting soon as they stormed the road here. They came around 8.30 a.m and operated for about two hours non-stop. We ran into this house, watching them through the window. They were shooting and screaming. They even dared the police. They stood in front of the police station for more than an hour, no police came out.

“After they had blown the entrances of the two banks, they came out with huge cash loaded in Ghana Must Go bags, big ones. You can imagine how much they carted away. I am sure it can’t be less than N100 m. We only thank God that nobody died in the incident. The only person hit by a stray bullet was an okada rider who brought a lady to the bank. And he was rushed to the hospital alongside three others who were injured while running for safety. We were hearing their leader shouting, ‘Don’t kill anybody, we’re to rob not to kill but if they fail to co-operate, we will destroy them and their banks.’

“They left around 10.30 a.m and drove to the jetty where they set ablaze their three jeeps and escaped in a speed boat.”

“I am the owner of this shop. I always come out around 8 a.m every day except Sundays because of church. I came out that same time on Wednesday, June 24, 2015. And as usual, I was arranging my goods. Suddenly, I heard a sound, Gba o! I thought it was from the exhaust pipe of one of the vehicles passing, but in another couple of seconds, it became sporadic. It was then I knew the reality of what was really happening. I didn’t know when I abandoned the shop unlocked and ran away. Everybody ran for safety. I hid in an uncompleted building up there with many others. That’s where we were, watching how the robbers were terrorizing the whole place.

“It was like a make-believe thing. See young boys shooting like soldiers, few of them wore military camouflage, shouting on top of their voices. They operated from 8.40 a.m to 10.30 a.m, almost two hours uninterrupted. They were shouting as they were shooting, commanding the bank staffers to cooperate with them unless they would find themselves in the pool of their blood.

“They blew the entrances of the two banks with explosives. They robbed them simultaneously. About three of them stood in the front of the police station directly opposite the banks, challenging the police to come out if they’re ready to die, ‘Come out if you can face us. You will die like chicken. If you know you have signed your will, dare us, we will leave you dead before leaving this place. But if you love yourselves and your families, just remain indoor. We’re here for business, not to kill anybody but if you dare us, we will kill you like chicken.’

“A girl was among them, wearing charms round her neck and waist. She was so bold and confident of herself. She held a SMG, commanding the rest of the guys. Some of them wore black dresses. They threatened to destroy the two banks and their workers if they refuse to cooperate with them.

“That morning, a lot of customers were already inside the banks, many were also outside making use of their ATM cards. They all took to their heels when the robbers started their terror attack. Nobody could wait. After like 30 minutes, they had succeeded in robbing First Bank and I learnt about N20 m was carted away instantly. In the two banks, they used about five Ghana Must Go bags to load the money and put them inside their jeeps. I learnt they stole about N60 m from Zenith Bank while some said it’s more than that.

“We heard them screaming when they saw the money. Even about three of them were dancing, celebrating victory on the road right in front of the police station.

“The robbery was massive. I have never witnessed such a thing. All the motorists, Marwa and okada riders were turning back. Some, out of fear, parked and abandoned their vehicles. They came back in the afternoon to pick them. The guns the armed robbers operated with were more sophisticated. That’s why I don’t blame the police that hid because I don’t think they could stand their guns. Let’s call a spade a spade, our government should equip the police with more sophisticated weapons. Most of the robbers terrorizing banks are not ordinary people. And police too have their wives and children at home. We only thank God the incident didn’t claim any life. Only few people were injured and they were rushed to the hospital for immediate treatment.”

We had a chat with one of the security men at the robbed First Bank branch, but he only volunteered to speak to us under the condition of anonymity. “Yes, the incident occurred on Wednesday, June 24, 2105. We’re all caught unawares. It’s like a dream. I am still in shock. But we thank God they didn’t kill anybody.

“It’s true they carted away a huge amount but I am not in a position to know how much exactly was stolen. As you can see, they’re just trying to reconstruct the damaged part of the building. As it is right now, no work within the bank now. Nothing is functioning, even the ATM boxes were destroyed. Everything was vandalized, including the strong room. So, it will take a few days before we can re-open for business. Although, workers are still coming, no transaction yet.

“Yes, the robbers were many. No one knows their exact number. They came on a mission to rob, and they succeeded. It’s like a terror attack. Nothing like that has happened since I started working with the bank. one thing I believe is that, sinners won’t go unpunished.”

Our attempts to speak to a security man we met at Zenith Bank were futile as he declined comment on every bit of our chat with him. He, however, confirmed the incident. “Yes, it happened as you said but I don’t have anything to say further about the incident. I think you also can see things for yourself. Everywhere is dull.”

We also visited the police station in front of the banks to confirm the incident, a police officer who spoke to us under the condition of anonymity said, “Yes, there was a robbery in these two banks on Wednesday, June 24, 2015. But I think the only person that can speak on that is the Police Public Relations Officer (PPRO). Even if you meet the Divisional Police Officer, he can’t comment. Meanwhile, he’s not even around. You’re free to go in and find out from the Station Officer (SO). And when we met the SO, he also confirmed the incident but declined further comment. He told us, “The DPO is not on seat. Please, come back later.”

We also visited the jetty on Kosoko Street in the community, where the hoodlums burnt their vehicles and escaped with a speed boat. One of the workers we met identified himself simply as Mr. John. He narrated the incident at that spot.

“Few of us were here sitting down, discussing and attending to those that came to have access to our zoo here. As you can see, this is a museum. A lot of people come here on daily basis to see different animals and relax with their families. When we saw the armed robbers coming with a high speed, we were confused because with the exotic cars they drove and on this narrow road, they’re not supposed to be driving the way they did if they’re normal human beings. And immediately they stopped and came out, I now knew they were men of the underworld because not more than 30 minutes before their arrival, we’re hearing loud gunshots and noise from afar. We saw people running.

“They alighted from their vehicles, shooting sporadically again and again, nobody could say this is how we all disappeared from here. One of the robbers was making calls, shouting on phone. I guess he was talking to the boat captain. ‘Where you dey? We dey here o! Please, come quickly.’ As he was making the calls, others were shouting. They were all bold. Young guys for that matter. They spent about 40 minutes on this street alone. They arrived around 11 o’clock and left here about 40 minutes later. They didn’t know this place before, I think there was somebody at the other end directing them. They brought out Ghana Must Go bags loaded with cash, set their jeeps ablaze and escaped through here. In the process, a jeep belonging to one of our clients was also razed.”

Our visit to General Hospital, Ikorodu, revealed that two of the hospitalized three victims have been discharged, but we’re not allowed access to their ward.

A member of staff who confided in us said, “It’s true they brought some victims here on Wednesday after the robbery in Ebute Ipakodo area. I think two of them have been discharged after they were certified better and stable.

Continue Reading
You may also like...
Related Topics:ikorodu, lagos, robbery