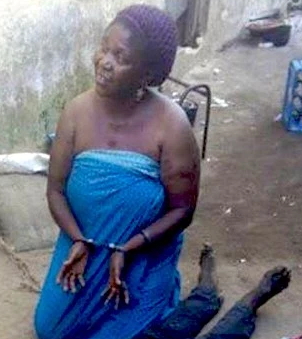 Christiana Odo, a Lagos trader who murdered her husband on Christmas Day was today charged for the murder of 48-year-old Romanus Odo.

Earlier, the prosecutor, Inspector Oladele Adebayo, told the court that the offence was committed on Dec. 25, 2016 at about 4.00 p.m. at No. 2, London Barber St., Majidun in Ikorodu, Lagos State.

He alleged that the accused stabbed her husband with a kitchen knife in his chest, killing him instantly.

“The deceased had come home in a drunken state and had a heated argument with the accused, who angrily picked up a kitchen knife and stabbed him in the chest,” he said.

The offence contravened Section 221 of the Criminal Law of Lagos State 2011 which prescribes death sentence for offenders.

She is expected to return to court on the 13th of February 2017 for hearing.