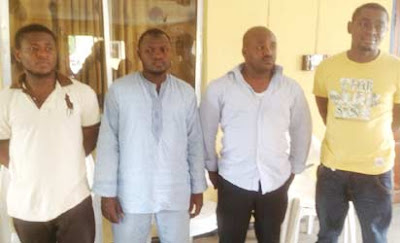 A final year student of Imo State University, Chibuzor Akobundu, has been arrested by operatives of Special Fraud Unit, Ikoyi, for allegedly swindling foreign women to the tune of $48,000 through a dating website.

Surprisingly, the 22-year-old Microbiology undergraduate confessed that his victims, resident in the United States of America, were ‘swept off their feet’ by his profile on the dating site.

He spoke with journalists yesterday, while being paraded alongside two staff of a second generation bank, who allegedly facilitated the withdrawal of money via Western Union Money Transfer.

The suspect adopted Devon Miles as his name and pasted a photograph of an unknown American citizen as his profile on the dating site.

He confessed to have swindled five American single women within the ages of 40 and 50, in search for husbands.

He gave the name of his first victim as Antoinette. He promised to marry her and was able to dupe her of $16,000 before she suspected he was a fraudster.

His next victim was one Jettie Simpson, who reportedly sent $5,000 to him via Western Union.

Others also duped by Akobundu were Shelly Bashir, $100; Billie Klock, $13,000, in a relationship that reportedly lasted for five months, and Andrea Desena, $8,000.

Akobundu said: “I started browsing the dating site three years ago, posing as a US citizen residing in Nigeria.

“At that time, it was a common game around my area in Ikeja. Along the line I met these ladies who were looking for husbands.

“They fell in love with me because of my profile, where I stated that I was a 49-year-old divorcee in search of a wife. I claimed to be an engineer.

“I would tell them I was stranded in Nigeria and needed some money to travel back to US and they would send the money via Western Union.

“At other times, I would tell them that my daughter was sick and that I needed money to offset her hospital bill and they would fall for the trick. I have never used charm to hypnotise any of them.

“My parents were never aware of what I was into because anytime I got a reasonable amount, I would travel to South Africa and squander the money.

“My regret is that I never used the money for anything tangible, to avoid suspicion. My mum is a teacher, while my father is a businessman and have been responsible for the payment of my school fees.”

Explaining how he was arrested, spokesperson for the Unit, Ngozi Insitume-Agu, said: “The arrest followed a petition via the Unit’s website from one Amelia Brosick, a US citizen, dated April 16, 2013, where she alleged that one Devon Miles, suspected to be a Nigerian, defrauded her to the tune of $16,439 using different tactics.

“She added that she met the suspect on a dating site in June 2012, and the suspect, under the guise of dating her for the purpose of marriage, obtained the alleged sum fraudulently through Western Union.

“Armed with the petition, Western Union was contacted and they sent a detailed spread sheet showing all the transfers in the name of the suspect.

“Their revealing statements led to the arrest of the serial internet fraudster, Chibuzor Akobundun also known as Devon Miles, Martin Williams and Sani Bala Ismaila. He adopted Devon as the internet name, but opened the account in the name of Martin Williams.

“He confessed that he provided the bank staff with the photocopy of his identity card so that they could withdraw the monies, while he gave them some percentage.

“The bank staff also confessed that they used Uche’s particulars to withdraw money from other persons’ accounts without his knowledge.”

However, Dike of the Owerri branch denied knowledge of what Akobundun was into. He maintained that he was only doing his job as a front-line teller staff of the bank, adding that he had never at any time paid Akobundu above the stipulated amount.

He said: “Anytime he came to collect the money, he would answer the question given  correctly, including the secret code.

“Mine is to ascertain whether the details corresponded with what was in the system at the end of which I would hand his money over to him.”

Asked if he received any gratification from Akobundu, he said he was given tips of N1,000 or N2,000 at times, just like some other bank customers do.