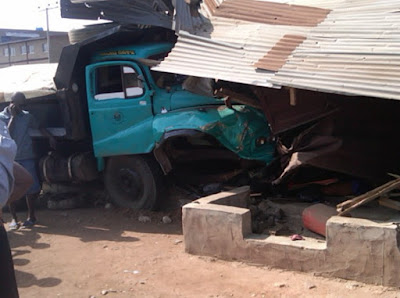 An unidentified woman has been crushed to death in Ado Ekiti.

The tragedy happened Easter Monday on Housing Road in the capital city of Ekiti State after a truck suffered brake failure.

According to eyewitnesses, the deceased was crushed to death by a Tipper with permit details  2016 EK, / ADK 008.

The victim had just climbed an Okada (motorcycle) when the tipper crushed her.

The driver of the tipper reportedly fled for fear of jungle justice.