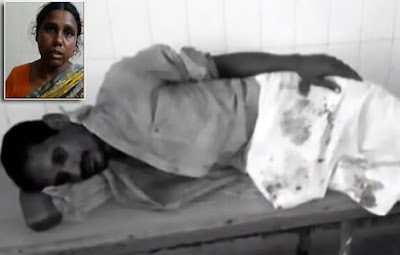 October 28, 2017 – Indian Woman Who Cut Off Drunk Husband’s Manhood As He Tries To Rape Her In Front Of Children Charged

A woman who chopped off her husband’s manhood during a futile attempt to rape her in Sirisedu India has been charged.

The enraged wife who was not named in local media confessed to police that her hubby, R.Ravinder came home drunk on the day he attacked her in front of their children.

According to investigators in Sirisedu India, the suspect took a kitchen knife and sliced off 40-year-old Ravinder’s genital.

Though doctors are still unable to reattach his severed manhood, Ravinder is said to be recovering in a local hospital in Jammikunta.

The defiant wife who claimed she acted in self defence told local media that her husband is fond of harassing her sexually every time he got drunk.

An attempted murder case has been filed against the woman.