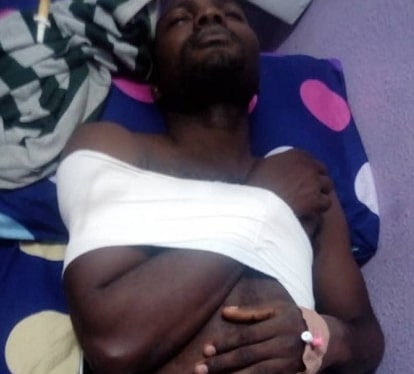 By Tajudeen Adebanjo, The Nation

An INEC official who got injured during the attack by hoodlums at Ago Palace Way, Isolo Lagos on Saturday, Mr. Ganiyu Ogundipe, had undergone surgery.

The surgery was carried out by an orthopedic surgeon under anesthesia to fix his dislocated right shoulder.

He slipped while scampering for safety and dislocated the shoulder.

Ogundipe, who is recuperating at a private hospital TSH Medical Centre, Mushin, Lagos would have to wait till September before his arm heal properly.

Some thugs during the election stormed polling units on Ago Palace Way and set ablaze cast ballot papers by the electorates.

According to him, the hoodlums were nine in number and came on three motorcycles.

Ogundipe, who worked as one of the Residential Area (RA) Technicians, said they were stoned and chased away by the hoodlums before setting ablaze the ballot papers and other materials.

Speaking with The Nation, he said he returned to the Lagos University Teaching Hospital (LUTH) after the surgery for another X-ray.

The X-ray, according to him, is to see if the operation carried out to correct the Humero-Scapula dislocation is well placed.

“The result of the X-ray showed that it was well carried out. The latest development is that the Orthopedic, who fixed the bandage, will have to re-fix it.

“After fixing it, we later discovered that my body is reacting to the bandage, which means that I’ll have to get another material as recommended by the Orthopaedic.

“I’m now waiting for him to come around, he’s going to remove this and fix another one that my body can respond well to. This, I learnt, will aid the healing,” he said.

According to him, the bandage will be on him for three weeks.

“For now, I might not be able to continue with the INEC work scheduled for March 9 because of the stress that might be involved.

“The doctor said after removing the bandage that I shouldn’t be bothering the hand for the shoulder to be well fixed.

“He said it’s going to take around four months for the arm to be firm so that I can use it for whatever work I am to use it for.

“After the first three weeks, I will wait for around four months for it to be back to its normal position, the way it was before the incident happened,” he said.

The attack, he said, left him disappointed for trying to serve his fatherland.

“I feel disappointed with the development. We were not being obstructed on a national assignment, we were attacked. Now, I can’t go about my normal life for now,” he said.

“He will still be in the position for three weeks and after three weeks, he will come back to the hospital.