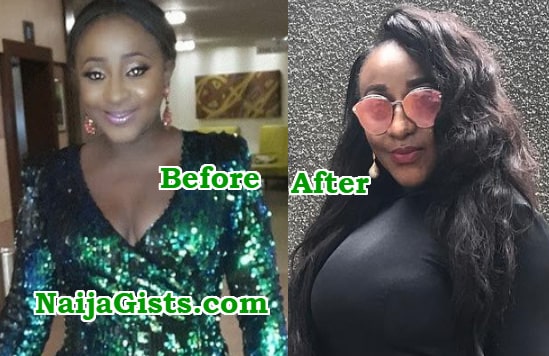 Ini Edo Denies She Had Plastic Surgery, Reveals Why She Shut Down Her Restaurant

What is the movie “Heaven on My Mind” all about? What inspired it?

The movie is about relationships and the ordeals of being in a bad relationship. It’s about a group of women who happen to be in an unfortunate relationship with a certain business man. Uche sent me the script and wanted me to act on it and when I read the script, it was quite different for me. So I thought, ‘why don’t we do this together as partners’ because it seems big. That was how we came about collaborating on the project.

Having starred in countless movies, what’s unique about your character in ‘Heaven On My Mind’?

Every character has its own peculiarity but in this particular one, my character is a very superficial privileged child, a Benin princess who is very self-indulged. One who all she cares about is herself, her social image, father’s affluence etc.

You just co-produced alongside Uche Jumbo for the first time. What was it like working with her?

It was a breath of fresh air. Uche is somebody that I have so much respect and love for as a person, a friend and colleague. I respect what she does and how she does it; the passion she has towards this industry and her job.

I look up to that a lot because that’s one thing you won’t find in a lot of people. She’s not in this for any wrong reason, she’s so invested emotionally in what she does, so getting to work with her not just as colleagues or co-actors but as co-executive producers opened my understanding to a lot of things. My respect for her went on a different level, seeing how she managed to co-produce with me, direct brilliantly well and still act her heart out despite the pressure of being at the helms. Directing, producing are a lot of pressure; I think she’s a super woman and my respect for her has since tripled. My working experience with her is one that I would cherish for the rest of my life and it’s a relationship I’d want to continue one way or the other.

Should we expect a movie that is produced and directed by you?

I like to know my forte. I wouldn’t say directing is not in view for me because like I said, never say never. Right now if I’m ever going to direct, I’d like to get proper training for that because I think directing is the bedrock of any movie. I think you can have a good story and bad directing will mess it up, I think a good director can turn a bad story into an interesting one. So I won’t want to go into it as an amateur, I’d love to get proper training and be fully equipped for it. So if you hear that I’ve gone to Film School, then know that I’m working on something but until then…

Why is it that we don’t see you in so many movies as before?

That’s a very frequent question but yeah, I took some steps back because to me, everything in my life is just timely. I like to take my time and sometimes I take my time off certain things just to get certain things done. I’m still acting but I’m not actively acting, not just as active like I used to be because there is a lot of other things I’m trying to tie my hands on and trying to re-focus as a person.

So, I try to give attention to other things that are important to me as a person, which are all personal by the way.

Words have it that you recently went under the knife. How true is that?

People will speculate all they want and it’s just life. I think I just grew into paying more attention to myself as a woman. Anyone who knows me from way back knows that I’ve always had a ‘full package’ and if I’ve done something like that, there wouldn’t be a rumour because you’d see it.

I’ve just taken more care of myself over the years. I’ve tried to be more consistent in certain lifestyle just to look the way that I love to look. Of course there would be speculations but that’s all they would be…Speculations!

There is also this story that you had a secret engagement. How true is that?

(Flaunts fingers without a ring) Next question!!

Who would you love to co-star in a movie if possible?

In Africa, I’ve pretty much worked with everybody apart from Stella Damasus. She’s the only one I haven’t worked with and I’d love to.

You once opened a bar and we haven’t heard much about it lately, what happened to it?

I shut it down because I had a lot of issues. Most importantly was with Lagos State, pertaining to road mapping where they insisted that I brought down the entrance because it was not authorised or so and there was definitely no way the place could’ve worked without a proper entrance and the car park. It was a lot of back and forth issues and I was at a place where I didn’t have the time to follow it up as it was taking a lot of my emotions and time. Other than that, the business was supposed to be a restaurant and lounge but then it just turned itself into a night club and I didn’t set out to do a night club. So it basically wasn’t giving me the kind of lifestyle I wanted because it was very demanding of my presence especially at night, while I just began a new phase in my life where I didn’t need that level of distraction. So, I just shut it down.

You’ve worked closely with the government in your state and you’re the SA to the governor on tourism. Do you have a political ambition?

I’d like to say never but I believe in the saying ‘Never say never’ because truth is, nobody really knows what tomorrow will bring. I used to say I don’t like politics at all but here I am today. I know I’m someone who has a lot of opinion. I have a certain way that I feel things should be done. I really don’t know where that part of me will take me to in future but I’m open to anything.

Do you think we have enough women in politics right?

No, I don’t think we have enough women in politics but I’m very sure that women are getting in gradually. Women have come out of their shadows and are participating in every aspect of everything that concerns this life. So as long as a human being can do it, a woman is doing it.

Tell us about your formative years?

I spent my formative years in Akwa Ibom State with my parents and siblings. Growing up with my folks was quite eventful and fun. I had the love of both my parents and siblings and we stuck with each other even when things didn’t look too good. I wouldn’t say I had it tough, as my parents, though, were civil servants, did their best at the time to make sure my siblings and I had what we needed and went to one of the best schools around…I have seen people who had it tough growing up so I wouldn’t say that was my case in any way.

We grew up under a strong Christian influence. My parents were church officials, so naturally, I believe that the fear of God and passion for humanity must have been imbedded from there. My parents are two very loving, simple and God fearing…constantly praying, admonishing, yet supportive of our every positive move.. A typical Christian family.

What was the best gift you received as a kid?

The best gifts would depend on the occasion…I always looked forward to the festive seasons where we would get new clothes and shoes for our end of year.

What have been your high and low points in life?

Worst moment was when I lost my grand mum who also played a huge part in our upbringing. Also, there were disappointments as people tried to pull me down but I pulled through knowing that everything in life happens for a reason. I always remember the bible portion that says ‘All things worketh together for good for those who love the Lord.’ So, this reassurance from God gives me the confidence and always pulls me up from every bad situation.

Any regret in life?

I try not to have too many regrets because in every situation, there is a life lesson to be learnt and these lessons only make me stronger and wiser.

What is your biggest fear in life?

My biggest fear would be not fulfilling my purpose on earth…we are all here for a reason and if that purpose isn’t achieved…that life may have been wasted.

What is the lesson life has taught you?

Life has taught me that if you stay true to yourself and shut your ears to the noise, the world will adjust. Also, never to put your trust in any human being. Never also judge a book by its cover.