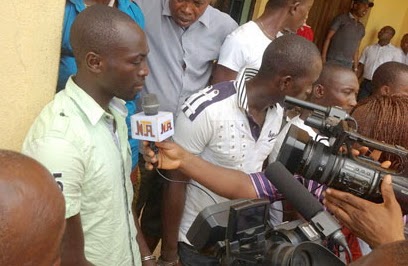 The palpable tension trailing the $16 billion Export processing zone (EPZ) Ogidigben in Delta State assumed worrisome dimension, as 14 journalists abducted by Ijaw militants are yet to be released.

Daily Sun learnt that the journalists were accompanying some Itsekiri leaders on a fact finding mission to the project site in Warri South West council when they were abducted on Sunday by the armed ex-militants.

It was gathered that the newsmen among whom were the Bureau chief, South–South region, Vanguard Newspaper, Emma Amaize, Shola Oniel of The Nation and Sola Adebayo of the Leadership Newspaper were tortured by youths at Gbaramatu. Others abducted were Emma Arubi, Bolaji Ogundele of Daily Independent and The Nation as well as Harrison Awoso of the Delta Broadcasting Service (DBS) Warri, reporters from Fresh Angle Newspaper and journalists from other media organisations.

Sources told Daily Sun that the journalists were forced to lie face down while Emma Arubi of Daily Independent was forced to hold an A.K 47 rifle and his photograph taken, an action described as a ploy to deceive security operatives to accept that some of the newsmen were armed with gun.

As at noon yesterday, the journalists, who were brought to the NNS Delta Naval Base Warri, were yet to be released, even after writing their statements.