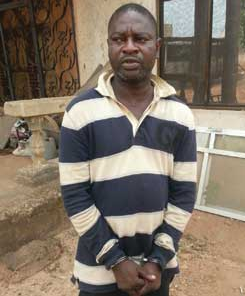 An insane man identified as 43-year-old Humphrey Omoregieva was today remanded for allegedly raping his mother after using a piece of wood to hit his father on the forehead.

According to police prosecutor, the suspect committed the offence on the 1st of August at his family house at No 294 Upper Mission, Benin Edo State.

He later damaged his parents mansion before fleeing the scene.

Chief Magistrate F E Akhere said the Egor Magistrates’ Court in Benin lacked jurisdiction to entertain the case. He ordered that copy of the case file be sent to the Director of Public Prosecution for legal advice.

The case is to come up for hearing on September 8.