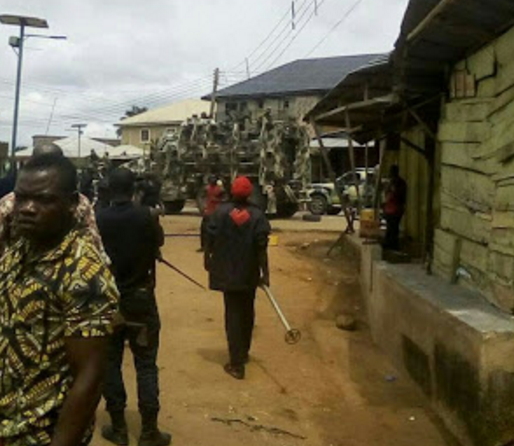 In the wake of a clash that happened in Oyigbo LGA of Rivers state today between some IPOB members heading to Aba and the Hausa community, Abia State governor Ikpeazu has declared a 3-day curfew in Aba as men of the Nigerian army take over the entire city to curb the activities of IPOB members.

Here is a press statement from Abia Governor on the 3-day curfew:

“Abia State has for the past few days been the focus of security searchlight occasioned by the reported skirmish between some groups in the State, especially Indigenous People of Biafra (IPOB) with men of the Nigerian Army.

Government notes and has observed the frenzy of activities of members of IPOB within Afara – Umuahia, the ancestral home of the leader of IPOB for some months now.
Government is equally aware of the recent proclamation by the Nigerian Army of Operation Python Dance II within the South – East geopolitical region of Nigeria.
The operation as declared by the Army is intended to check kidnapping, banditry, assassination, secessionist activities within the region, amongst other forms of criminal activities.
The recent confrontation between the Nigerian Army and members of IPOB on Sunday, 10th September, 2017, could presumably be attributed to the commencement of the said Operation Python Dance II.
The Abia State Government unequivocally states that Abia is a component State of the Federal Republic of Nigeria and subscribes to the supremacy of the Constitution of the Federal Republic of Nigeria and all other extant laws

While the Government of Abia State recognizes the right of the Nigerian Army and other security agencies, to perform their statutory duty of protection of lives and property of Nigerian citizens, such duties must be carried out within acclaimed Nigerian and international standards of engagement with the civil populace, with due respect to the human rights of citizens and sanctity of human lives.
The Abia State Government is committed to the protection of the lives and properties of its citizens and others residing and doing business within the geographical entity called Abia State.

Abians and others living within Abia, are advised to remain law abiding and carry on their lawful business without fear, as efforts by Government will be made to reduce friction between the civil populace and military personnel in the State.
Meanwhile, Aba residents are advised to observe a curfew from 6pm to 6am from today 12/09/2017 to 14/09/2017.

Persons residing within the State are strongly advised to remain law abiding, while going about their lawful business without fear of molestation, and, not engage in any form of confrontation with military personnel or other security agents.

The Government recognizes the constitutional Right to Freedom of Movement for all Nigerians, but objects to the influx of people into Abia State for purposes of unsettling the enduring peace in the State.
Finally, Abia State will co – operate with security agencies to maintain the rule of law and order in the State.
Okezie Ikpeazu PhD
Governor, Abia State
12/09/2017”

Continue Reading
You may also like...
Related Topics:abia, ipob, members