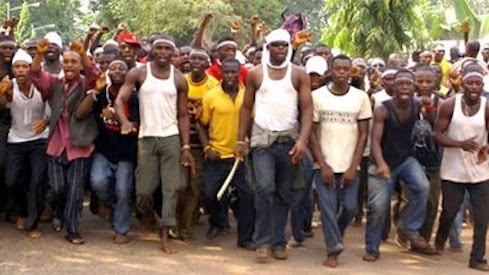 The situation in Yenagoa, Bayelsa State now is worrisome. Shop owners, markets and other business outlets were forced to close down on the ground that today is Isaac Isaac Adaka Boro Day,a former Niger Delta Militia.

In the Nigerian constitution, today was never reserved as Public Holiday. Bayelsa indigenes and youth were spotted singing in native chants through the streets of Yenagoa.

They threatened to burn down any shop or business outlet that opens up for business today. Most of these businesses are owned and operated by non indigenes. The police officers are not doing anything about it as well.

The Bayelsa youths have been using violence as punitive measures against all business outlets functioning in Yenagoa today.

An eatery named Klimajaro and another Pepperoni was attacked by the youths for functioning after they announced that no business should open. As a result of that, the eatery was rasacked by the youths and their foods and snacks were carted away.

The youths devoured foods and snacks ranging from chickens, fish, Rice, turkey, snacks ,bread, meat pie, burger etc. Some other business outlets like boutiques were ransacked and goods worth thousands of naira was carted away by the youths.

The situation now is that they are using it as an opportunity for stealing and intimidating non-indigenes within Yenagoa.

Finally, the victims mostly Igbos are complaining that the state government security agency is not doing anything positive to assist in bringing order as this has been happening for few years now.

Last year, provision stores and some eateries were also ransacked and goods worth thousands of naira was carted away in name of punishing offenders who tried doing business on Isaac boro day which is not even legally recognised.

I am writing to you so that other Nigerians will be aware.