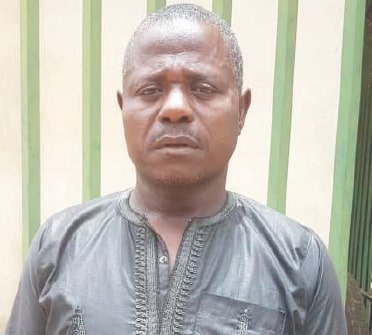 Islamic Cleric Who Prays For Kidnappers Confesses After Arrest

A Muslim cleric identified as Salisu Abubakar has given details to the police on the role he played in encouraging activities of suspected kidnappers in some northern parts of Nigeria.

The acting Inspector General of Police, Yakubu Abubakar and other service chiefs have been under pressure following the rise in cases of kidnap along Abuja-Kaduna expressway. Several strategic raids of suspected hideouts led to the arrest of suspected kidnappers and their accomplices. One of such persons is Salisu who was arrested by operatives attached to the Inspector General of Police, Intelligence Response Team, a move that has led to the arrest of several suspects.

According to police source, police acted based on intelligence report generated by the Technical Intelligence Unit(TUI) on April 4, about the activities of alleged spiritual adviser of the suspected kidnappers in the North especially Kaduna axis. On April 16, after serious and unrelenting follow up, operatives of IRT succeeded in arresting Salisu Abubakar, inside a bus in Galadimawa village, Kaduna state.

The 48-year-old who is a native of Dutsinma in Kastina state confessed to the police that he is their spiritual adviser. He disclosed that most of his clients operate along Abuja, Kaduna, Zaria, Niger and Kastina states axis. While the interrogation lasted, Salisu had to pause severally to receive calls from them.

My job is to pray

Responding to questions, Salisu insisted that his only job is to advise the suspected kidnappers when and where to attack. “I was an honest cleric before those bad men took over our community and some of us for fear that they will kill us, decided to work for them.

“I am happily married to four wives and God blessed me with 15 children. My father is from Kastina state but relocated to Kaduna because he acquired a massive land for farming. He was also very spiritual that was why he sent me to Arabic school. I also learnt how to cultivate Maize and Guinea corn. Luckily when I was at the Arabic school, I got the gift of vision and healing.

“I started practicing and also farming because then we made a lot of money through farming. About 10 years ago, kidnapping and cattle rustling increased. It was no longer safe to be seen as a successful farmer. If they do not kidnap you they will wait till the day you harvest your crop and attack. For a man with so many children, I needed to train my children, so I decided to start using my gift to make extra money. I started about eight years ago, to pray for people and in exchange they will pay a certain fee. Go to our community and ask about me. We rarely go the hospital. I guess it was my popularity that brought them to my shrine. Three years ago, they kidnapped me and told me that they are not interested in money but my powers. They forced me to pray and advise them for one operation and I did. They were very successful and happy. The next day I was released but with the condition that I will be working for them. They threatened to wipe out my entire family if I fail to co-operate with them.”

On the payroll of 15 gangs

According to Salisu, more than 15 different criminal gangs consult him on a monthly basis and he has never failed them. “They trust my work so much because for the past three years that I started praying for them, none has failed to succeed in any operation they set out to do. I became so popular because they normally share the good news with others. They come looking for me from different parts of the country especially the north. I do not ask for anything much but the cost of procuring the things needed for prayers. It is left for them to decide to give me anything extra.

“I have tried my best to stop them but whenever they come to my shrine, they are armed. I thought of running away from the community but I was shocked when one of them traced me to Kaduna town. I feel safe working for them and for the past three years, they have not harassed me or any member of my family.”

He also alleged that most of his clients were from Zamfara and Kastina state. “Most of them relocated from Zamfara with their families because there are so many criminals in Madugu village close to Galadinmawa in Kaduna state. The true indigenes have all left the village and about 30 percent are left. For you to be allowed to stay, you need to co-operate with them. All the elders that are left are loyal to them. That place is a might forest and there are so many armed residents; police or army dare not enter the area, they will be killed and buried.”

On why they did not alert security agents when they noticed the sudden influx of strange faces, Salisu said that they reported to the nearest police station but they did not attend to them. “Initially, they started by rustling cows and harvesting our crops. We the elders reported the matter to the nearest police and they did nothing about it. In fact, the policeman on duty asked us to form our own vigilante and fight crime. How can you fight people with bare hands?

Those criminals will attack and go back to their state. Gradually they started relocating to the community with their families. I also gradually moved some of my wives and their children to Kaduna town because, you cannot predict what those killers can do when they are angry.”

With his so-called spiritual powers, Salisu was asked why he could not detect that policemen were about to arrest him. “I did not commit any crime; all I did was to advise them through prayers. If I knew that police will ever come after me, I would have disappeared. It is my job to pray, I should not be held responsible if the people I prayed for used my suggestion to commit crime.”

On the way forward, Salisu volunteered to assist the police to arrest most the criminals. “You can see that they are still calling to seek for my spiritual consent before they can go out. I can help them out. All they need do is to allow me to go home and pray. Then I will give them the list of things to buy which will not be more than N50, 000. After two days of prayer, Allah will show me their location and also advise when to strike and be very successful. It was when I got to the station that I realized the number of people they kidnapped and that they even killed some of them. I am sorry that I was not bold enough to come forward these past three years. If the police will assure me and my family that we will be safe, I am ready to help them arrest all of them.”