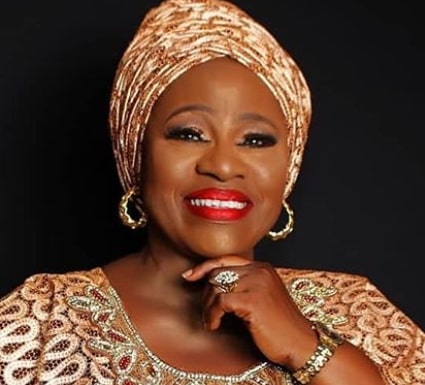 “The government should help the industry to eradicate piracy; there was a time a producer was even mobbed when he went to fight some pirates in Alaba. Piracy has eaten deep into the industry, I am grateful to God because I have other sources of income like anchoring weddings and being a brand ambassador. I started anchoring weddings after one of my sisters-in-law insisted that I anchor her child’s wedding fifteen years ago,” she told Saturday beats.

The veteran also advised the upcoming actors and actresses in the industry to live in harmony and stay focused on their career and ambition.

“People in the industry should love themselves and be faithful to their colleagues; they should not live a fake life. The youths of this generation think we are stupid but we are not; there are some things I overlook on set just because of the passion I have for my career. I respect both the old and the young in the industry because of my goal.

“The reason for failed marriages in the industry is a result of lack of patience; men will always be men, so women have to be patient with them. If a woman should jump from one marriage to another, it sends a bad signal.”

Also, talking about how she was able to take care of herself and her children after the loss of her husband, Philips said she intended to remarry but the attitude of men towards her discouraged her.

“I had the intention of remarrying after I lost my husband, there was even a time a man visited me in my house when we were all eating with my children and some other youths that stayed with me; he had to ask me if all the youths in my house were my children, I replied him in the affirmative. Due to my reply, he asked me a rhetorical question that insinuated he was overwhelmed with the number of children he would have to cater for when he married me. After that time, I never saw him again. After this incident, I never thought of getting married again because I was no longer interested because most of them used to lie a lot.

“Nobody can take care of us like God, considering the type of things we eat these days. I can’t even say how I keep up such ageless beauty but I can say I try to eat right; considering the fact that I had to take care of my children all by myself after I lost my husband. I used to take them to my mother’s place when I had to be on set; I used to go to about four locations in a day just to get some money to enable me cater for my children,” she said.

Philips, who recently got some major endorsement deals, said she never knew she would be honoured by those endorsements at that age.

“I never expected all the endorsements that I have right now; I am amazed at the grace of God over my life,” she added.