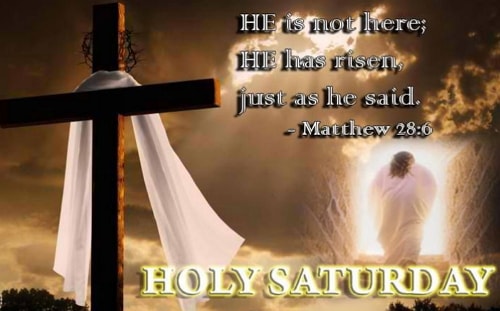 I recently had a discussion with a pastor friend, in which he told me the resurrection of Jesus Christ is the greatest proof that Jesus had conquered death and everything else that could hold the human body down for us.
Do I agree with him? Yes. But that is not all there is to the story.

I say this because it would require much more than just a discussion, an article, a book, even books, to explain the full import of the significance of the empty tomb mystery.

The tomb of Christ, rather than represent an end, or death, actually represent a beginning, a new life, a new universe, for all who believe.
Almost every available early source tells us that Jesus died unequivocally on the cross on that first Good Friday at the hands of the most efficient killing machine in the history of mankind: The Romans.
Saint Mark tells us that the governor sent a senior officer to make certain Jesus was really dead. Saint John tells us that a lance was plunged into his side, from which water and blood oozed out. Confirmed dead, the governor gave permission for the body to be removed from the cross.

Was that the end as expected? No.

Three days later, not only did his body disappear from the tomb, those who knew Jesus so well reported that like he promised, they saw him appear in flesh and blood.

Saint Luke reported that Jesus even went through locked doors, spoke and ate with people, and Saint John tells us that he even gave Saint Thomas the chance to reach his hand and deep it into the wounds of his crucifixion.
Even the staunchest of modern day critics like the opponents of his day, and many of the ‘Jesus did not exist’ advocates, like the great professor G A Wells, and scholars from all works of life, almost unanimously agree that the body of Jesus was nowhere to be found exactly three days after his crucifixion and that no one in history till that has been able to offer satisfactory explanation to account for the empty tomb mystery.

Among the countless artifacts that archaeologists who are working in and around Israel today have found, the Delphi inscription, among other sources and outside the Bible, proves that Saint Paul did believed and preached the resurrection of Jesus.
According to authorities, many of them dating as far back as AD 36, Jesus died and rose on the third day. The apostles staked their lives for this belief, were willing to die for it, and many did indeed die for it.

But because we have seen a number of skeptics today deny Jesus death and resurrection, the question of whether we can trust 100 percent the testimonies of the gospels and the ancient early text becomes imperative?
In this ostensible simple question lies the crux of the matter for the Christian faith, the hope of mankind over death, and as many argue, the best thing the soul of a man should gravitate towards.

A number of Bible critics, western atheists, and even Islamists have come forward to point out that the New Testament accounts are a “…hopeless jumble of confusion…” because as they claim, there are inconsistencies in the stories of the witnesses and as such should be rejected. The Islamists for example, on the one hand say because the gospels were written 60 years or so after Christ, their records could not be trusted, but on the other hand, they want us to believe the Koran written over 700 years after Jesus and the events, in a place, time and by a person as far removed from Jesus and the events as the earth is form the sky should be accepted.

They say a strange man was used to replace Jesus by God at the very moment he was to be crucified. Even though we the know the sources of the Islamic stories about Christ, we ask why a theology that doesn’t believe that a man can take the sin of another man argue that an innocent man was asked to take the place of Jesus who they claim was a mere man.
Keen observers would notice that women were the very first reported to have testified to Jesus’ resurrection. Why would women, whose testimony held no water in first century Jewish culture, be presented as being the prime witnesses of the events if the accounts of the gospel were invented?

Can we not liken the so called inconsistencies in the stories to what we see today of news reporters, or witnesses of, let’s say a road accident, asked to report what they saw in the scene? If they had to tell their stories from memory, would their stories be the same? Yet, would that detract from the fact that an accident indeed happened?

The great British scholar Ian Wilson made the point when he said it in these so called inconsistences lie the authenticity and truth in the resurrection stories.

All the synoptic writers tell us that the women took careful note of Jesus burial site, so could not have mistaken the place as some argue.
Saint Thomas said he would not believe until he confirmed, which he was allowed to do.
Yet, we have seen those who have given some “reasons” to doubt?

For example, Hugh J. Schonfeild in his book the Passover Plot says the vinegar given to Jesus on the cross was some sort of a medicine to induce the appearance of death so that his disciples can revive him later, and that the gardener that Mary Magdalene saw when she went to the tomb was actually the man drafted to revive Jesus which she mistook for Jesus himself.

Others have argued that Jesus actually survived the cross, emigrated to France or Egypt or even India. In fact the Ahmadiya Muslims of Kashmir can still point today to a tomb where they say Jesus was buried after living to a ripe old age of 80 years.
Richard Reitzenstein and his colleague at the History of Religion School, many years ago, led the argument that the resurrection story of Jesus is similar to the death and resurrection stories of ancient pagan fertility stories, i.e, the cult of Osiris, Tammuz etc that was prevalent in the Near East in ancient times.

Some also insist that Jesus’ disciple suffered from what they called “Post Hypnotic Programming” that Jesus somehow programmed them to believe, and so on.
But serious minded scholars, from comparing Jesus’ story side by side these fertility gods’ stories, have pointed that Jesus’ story is far different from anything before or after it, and no one today can explain what hypnosis really is. If scholars don’t really understand hypnosis today, how can some argue that Jesus used it on his disciple?

Professor Dieter Georgi of Howard University argues that the resurrection story was written into the gospel account later. He points to tomb worship in ancient Jewish culture, of men like Hanina Ben Dosa, whose tomb is still used as a place of worship till date as a good example for this.

For us Christians, the risen Christ story is as real as the lines in the palm of our hands. And for this reason, I will conclude this piece with excerpts from the great C S Lewis’s book ‘God in the Dock”

“We come to the strangest story of all, the story of the Resurrection… Something perfectly new in the history of the Universe had happened… Christ had defeated death… The door which had always been locked had for the very first time been forced opened…God has come down into the created universe, down to manhood – and come up again, pulling it up with him…
The things he says are very different from what any other teacher has said. Others say, “This is the truth about the Universe. This is the way you ought to go,” but he says:

“I am the truth, and the way, and the life.” He says, “No person can reach absolute reality, except through me. Try to retain your own life and you will be inevitably ruined. Give yourself away and you will be saved.” He says, “If you are ashamed of me, if, when you hear this call, you turn the other way, I also will look the other way when I come again as God without disguise. If anything whatever is keeping you from God and from me, whatever it is, throw it away. If it is your eye, pull it out. If it is your hand, cut it off. If you put yourself first you will be last.

Come to me everyone who is carrying a heavy load. I will set that right. Your sins, all of them, are wiped out, I can do that. I am Rebirth. I am Life. Eat me, drink me, I am your Food. And finally, do not be afraid, I have overcome the whole Universe.” That is the issue…”
As a mortal, feeble and weak man, this is the crux of the matter for me, and the significance of his empty tomb…

Bitter Truth: We Have Lost Nigeria To Jihadists Disguising As Fulani Herdsmen
Nigerian Presidential Election 2019: With Our Voters Cards, We Can Send Buhari Into Permanent Retirement