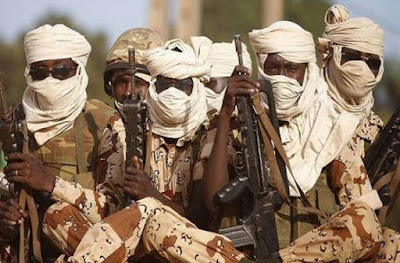 By Albert Afeso Akanbi – I had the privilege of meeting and listening to the opinion of an elderly retired military officer from Otukpo, Benue State earlier in the week.
He told me point blank that we have “we have lost our country”, that what is happening today, especially in Benue his home state, was more than mere clashes between herdsmen and farmers.

He said some powerful forces with an age long agenda had taken over the country and in the guise of communal clashes and acts of terror, were wreaking havoc and furthering their agenda.

From the Maitasine carnage of the 1980s, to the crisis in Yola in 1984, Sokoto 1986, Gombe etc, and in fact the countless ethnic and religious clashes, in which many have been wasted for no reason, to Boko Haram and now Fulani Herdsmen, that it has been the same agenda and one particular religion has stood out as the common denominator of attackers, and this religion was chosen for some reasons.

He drew my attention to a recent interview of Pastor Ladi Thompson of Living Waters Unlimited Church, Lagos, with Seun Okinbaloye of Channels TV where the clergyman said we are witnessing something that runs deeper than mere communal clashes or acts of terror and advised “…the government and people of Nigeria to do something about our fault lines –religion and ethnicity- and ensure that this dangerous religious elements and their ideology is stamped out ones and for all…”

He lamented how he often gets confused when he hears adherents say theirs is a religion of peace, when in fact, according to him, its founder spent the better part of his adult life fighting wars. When his trusted companions went to war with themselves soon after his demise and countless of his followers throughout history, often went violent, killing people and burning buildings, sometimes for “reasons as trivial as drawing the cartoon of its founder”.

He then ask me how we can continue to maintain the argument that this religion breeds peace loving people when warfare and violence was among the chief preoccupation of its founder, when killers like Boko Haram today can actually point to verses in its scriptures that seem to support or provide example for their actions.

How can armed men who believe as they were told that ‘…the only true religion permitted by God is…” theirs, and that non-believers are wrong doers who have no faith, and that most of them have perverted God’s commands, and are actually ‘Dhimmi’, or sub-humans and infidels, show remorse when they take the life of such people, especially when they believe those people have wronged them i.e have stolen or killed their cows? How can they care when they believe they have God’s blessings when taking such lives?

Like Reverend Thompson, the old man said these people would not stop until either everything was within their power or they were stopped by the Nigerian people. He said they are just hiding under the guise of a religion.
He illustrated his point with a Jewish ballad:

“There was this little sardine swimming off the shores of Elliat. He meets a shark and humbly says the normal greeting, shalom which means peace. To avoid a clash he offers to give up its tail, some fins, some scales, but it seemed all this availed nothings. Now, for a real and lasting peace, he surrenders everything to the shark. The shark nods in agreement, utters the word ‘peace’ , opens his mouth and swallows the sardine whole. That was the lasting peace”

“If according to their belief everything belongs to their God, then for lasting peace, like the shark, they must have everything and anything short of that is unacceptable”.
He said we were deluding ourselves to believe violence will ever go away if we don’t find a way to deal with these issues ideologically. If we don’t find a way to get into the minds of these killers and their potential recruits, and model what they believe towards love, empathy, respect for life and change their orientation of how they see ‘infidels’.

Although as an indigene of Benue State I understand the old man’s frustration, as I sat there listening to him, I didn’t know whether or not to believe him.
Just yesterday sad the news of Boko Haram’s attack on the Rann IDP camp in Kala Balge LGA, Borno State, filtered in. Recall that this same camp was victim of a ‘misfired’ bomb from the armed forces sometimes last year. Scores were reported killed.

On the Twitter handle of former Aviation minister Fani Kayode of 12th February, we saw a heart breaking picture which he said was sent to him by The Christian Association of Nigeria, CAN, of the charred remains of a pregnant woman allegedly set alight by suspected Fulani Herdsmen.

On Monday last week, there was yet another round violence in Kasuwan and Magani communities in Kaduna in which many houses were set ablaze and many killed.
Tuesday morning, we woke up to news of well-armed men suspected to be herdsmen again who invaded two densely populated communities, Suwa and Burukutu in Adamawa State, killing over 20, displacing many and setting alight many buildings. In fact, I watched with horror on Channels Television how survivors related their stories, narrating how residents fled in all directions upon the invasion.

Then like dejavu, we also learnt of reports last Monday of the uncanny replication of what we saw in April 2014 when over 200 girls were abducted from Chibok, as armed men again raided Government College, Dapchi, Yobe State and carted away over 100 girls.
Though government told us sometimes ago that they have vanquished terror from the land, and then recently told us again that it’s not yet Eldorado regarding the fight against terror, anyone familiar with the news coming from Nigeria lately, can confirm that Nigerians live in fear, especially in places like Benue, Nasarawa, Edo, Adamawa, Yobe and so on.

The pictures that we have seen emanating from some of these places have been very horrifying. For example, we have seen pictures of how knives have been run through the skull of 4-year-olds, seen gory pictures of dissected remains of pregnant women and the likes. The situation has reached a point where Senator Sani from Kaduna State on his twitter handle yesterday said Nigerians were no longer moved by depressing pictures of violence. These have left many of us wondering if Satan himself has not moved his headquarters to Nigeria.
Personally I find it surprising that anyone would chant “God is Great”, like one of the survivors of the Adamawa attacks related on Channels TV, when they want to attack, or are actually attacking.

I would expect a man who just put a knife through the head of a 4-year-old and plucked out his eyes, to somehow show some level of, or even act like he is remorseful, not to wash himself up and the next minute bow in ‘prayers’. Was the old man right when he said there is something in the code of the belief system of these killers that deadens their conscience, and erases the belief in the sacredness of life, so that they can go about with a sword on one hand and their religious book on the other hand?

These radicals have access to the over 15 million alimajiris children under the tutelage of clerics with no child care training, who are roaming unguided in the streets of northern Nigerian cities. This number is more than the population of three countries put together.
Tell me how a mind as fertile and young as those of these kids cannot be poisoned; how they cannot be easy target for terrorist recruitment, how they cannot turn cold blooded killers tomorrow.

With the ease with which the Dapchi girls were taken, I believe there are something our politicians not telling us.
The fight against terror must be ideological as it is military. And we must begin to cater for our young, especially the large reservoir of alimajiris in the north.

Go anywhere on this planet, you will find Nigerians doing very well everywhere they are. We have the resources and the population, which is what any country needs to be great and so have no reason to be the way we are today. In fact, we should be the hub and epitome of development in the sub-region, yet look at what dangerous politicking, religion and tribalism is doing to us.

Whether or not we are ready to take our country back, I don’t know, but I believe something will eventually happen that will turn everything on its head in the nation and shock everyone.
I just hope it will be in my lifetime.