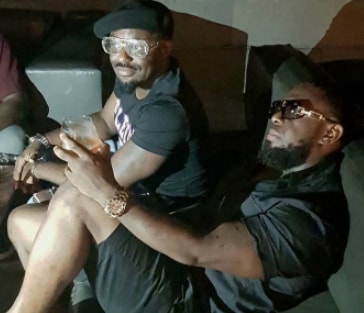 Two top Nigerian entertainers have come out as friends.

Jim Iyke recently revealed to The Entertainer why he always calls Timaya his brother.

Only a few artistes in the Nigerian entertainment Industry can openly single out a colleague as their bestie, that is why the relationship between Jim Iyke and Timaya  is often misunderstood.

See how Jim showed encomium on Timaya in a recent telephone chat with The Entertainer.

“Timaya and I are kindred. He is one of the most open-hearted and kindest people I have seen. To love Timaya is easy and he is like the brother I don’t have. Anyone that is in your life and tells you things the way they are, it is easy to love that person. It is when you are afraid of criticism that you cannot make friends with Timaya because when I go wrong, I ask him if I made the right move and he tells me the truth that I did not act right and that I messed up. When I am getting things right and people are criticising me, he tells me that I am doing the right thing. If you look through his history, he is the most consistent artiste of all time.

“He is the most consistent with every tide, trend, competition and level he meets it and surpasses it. People may never term him the number one in the industry but how many people can remain relevant in the entertainment industry for almost 12 years? Why would I not want to be friends with such a person? It is the same thing with me. Timaya understands the business I do, he loves it, calls me sometimes about some of my business moves and I am always happy to explain them to him. We call each other to share business ideas. For instance, if he buys a property and begins to build a house on it, I would ask him the reason behind the business move and he would explain.

Timaya is someone that could call me to inform me about a landed property and predict the value of that property in five years and he is always right. Even when I am skeptical to buy the property, he would tell me that he would buy it but I would refund his money and that is what he would do. If a business idea also springs up from my side, I call him to inform him about it; if he is wasting time, I would buy it for him because I know how I would get my money back”.

Continue Reading
You may also like...
Related Topics:jim iyke, timaya

Afeez Abiodun Owo: I Disliked My Tribal Mark In My Childhood Days Because Bus Conductors Bullied Me
Klint Da Drunk: I’m A Good Actor Like Patience Ozokwor Who Is Very Good At Playing Wicked Woman’s Role