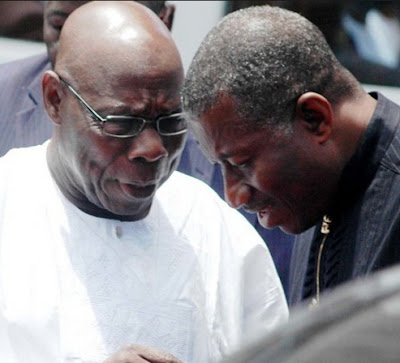 Ex- president Olusegun Obasanjo has explained why the war against the Boko Haram insurgency has remained intractable, noting that the country needed to treat the root of the problem and not the symptoms.

Speaking in an interview with the BBC in Lagos, Obasanjo noted that former president Goodluck Jonathan did not take the insurgency seriously in the belief that the terror group was a device by the north to bring down his government.

He recalled his visit to Maiduguri in 2011 where he learnt about the sect’s grievances which he took to Jonathan expecting him to address the issues.

He thought that it was a device by the North to prevent him from continuing as president of Nigeria which was rather unfortunate.” The former president observed that Boko Haram insurgency may not end soon, noting that it stemmed from under-development, unemployment and youth frustration in the north-east.

“Boko Haram will not be over; it started from a position of gross under-development, unemployment, youth frustration in the north-east. So we must be treating the disease not the symptom,” Obasanjo submitted.

IPOB Members Will Not Allow Anyone To Attack My Family, Nigerian Army Is Calling For War – Kanu
Benin Elders Return Wuraola’s Bride Price As Ooni Of Ife Releases Her To Remarry