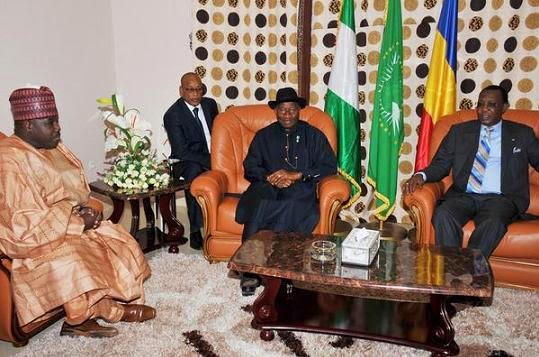 Alimodu Sheriff is Nigeria’s #1 facilitator of Boko Haram and DSS have promised Nigerians to investigate him.

Alimodu Sheriff is the guy in native, and Chadian President Idris Deby is the guy beside Jonathan. The picture was taken yesterday in Ndjamena, the capital city of Chad.

So why did Jonathan travel with Alimodu Sheriff to Chad?

When did Jonathan become a remote controlled-toy and who are his advisers.

How can he hold security talk infront of a supposed enemy, no wonder Nigeria is not winning the war against Boko Haram #SMH.

Karen Igho Has Moved To The US, Ex-BBA Winner Says She’s Scared Of Nigeria
Drama As ‘Ebola’ Monkey & Owner Chased Police Out Of Station