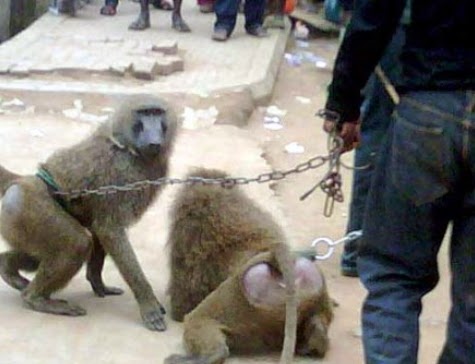 The fear of Ebola is the beginning of wisdom played out yesterday as a monkey and its owner stormed the “A” division of Bayelsa State Police Command and caused pandemonium. There was confusion as policemen scampared for safety.

This is even as an 18-month-old baby was quarantined in Rivers State.

Monkeys have been identified as one of the animals to be avoided because they harbour the Ebola Virus Disease (EVD).

Checks indicated that the owner of the monkey simply identified as Madam Ebitare, was arrested by a patrol team of the division at Swali market for still selling live and dried monkeys to Bayelsans.

She was said to have been taken to the station and upon arrival, policemen ran for their lives when she alighted from the patrol van with her monkey.

Eyewitnesses said the commotion she caused attracted the attention of some top officers at the station who immediately ordered the patrol team to take her and the monkey outside the premises.

The monkey heightened the confusion when it broke off from its owner, forcing many people who were watching the drama to flee for their safety.

The owner pursued the monkey and caught up with it. Her case was subsequently referred to the Ministry of Health.

A source at the station said the leadership of the division were not aware of her arrest, but on hearing about the incident, they have alerted relevant authorities on the situation.

“The incident shocked many. We have alerted the Ministry of Health on the continued disregard to the purchase of bush meat and eating of bats,” he said.

He advised them against visiting traditional healers or prayer warriors over any case of EVD to avoid the spread.

Meanwhile, a baby had been quarantined at the Ebola Treatment Centre in Oduoha community, Emohua Local Government Area of Rivers State. Commissioner for Health, Dr. Sampson Parker, disclosed this yesterday, while briefing newsmen in Port Harcourt on the situation report of the virus.

Dr. Parker said the baby was among those who had primary contacts with the late Dr. Iyke Enemuo, the first Ebola victim in the state.

He also informed that the late Enemuo’s sister, Chinyere, who tested positive to the virus, had been treated and discharged from the centre.

According to him, the baby, who was among the high risk contacts, became symptomatic at the weekend and was moved to the treatment centre, but yet to be tested.

“A symptomatic contact was also discharged. He tested negative to the virus and was treated for something else and discharged. Right now, we have another admission, an 18 months old infant; but yet to be tested,” he said.

Dr. Parker noted that about 479 contacts were now under watch, adding that 94 per cent of them were already being followed up, adding that the remaining figure would be covered before the end of yesterday. He cautioned members of the public against stigmatisation, saying that malaria kills more people than the Ebola virus.

He asked: “Why don’t we stigmatise malaria patients? We have about 479 contacts now, about 94 per cent of them are being followed up by today, we will cover all of them. Our points of entry are now well covered. Activities there have improved and going on very well and our worker fully on ground”, he said.