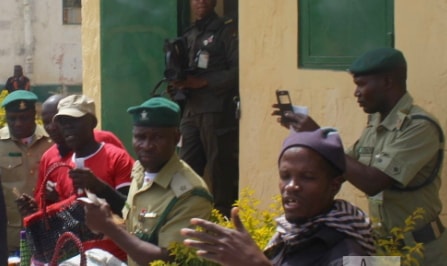 Rabiu Lawal, a 30 year old Prison warden has allegedly impregnated a 13-year-old girl, (Name withheld), who he also abducted from her guardian’s house to undergo abortion.

The suspect, a warden at the Jos Prisons, and also a resident of the prison’s barracks allegedly started raping the minor since January, which eventually led to her becoming pregnant.

Thenation investigations in Jos revealed that the minor was repeatedly raped for several months.

When we spoke with the victim, she confirmed that the suspect threatened her and had sex with her forcefully, almost every time on her guardian’s bed.

According to the minor, Lawal usually waits for her guardians to leave for work in the morning; he then comes to their apartment in the same barracks to have sex with her.

“I was brought to Jos in December 2017 from Langtang, to help my Aunt with domestic work as her husband was transferred to a different state and she needed help.

“In January, Lawal came into our house when my aunt had left for work and held my hand and dragged me into the room to rape me but I screamed and he ran away.

“The next day, he came back and threatened to harm me if I screamed again, so I allowed him to have his way and he took me into my aunt’s room and raped me on her matrimonial bed.

“Lawal was always coming almost every day to rape and threaten me; he never promised me anything and I have never received anything from him,” she said.

The victim’s guardian, Mrs Khadijah Isah, told Our Reporter that on May 21, she suspected that the young girl was pregnant, as she was always sluggish and sleepy.

Isah said that when interrogated, the victim opened up on Lawal’s constant abuse, after which she took her to the hospital and was confirmed pregnant.

“My family members immediately summoned Lawal to my house and he accepted the allegation and suggested that the pregnancy be aborted as he was not ready for marriage.

“We did not agree with his plan to abort the unborn baby and we asked him to invite his parents to the house for discussion on how he will take care of her and the unborn baby,’’ she explained.

Isah told Our Reporter that the suspect agreed to come with his family for discussion but ended up abducting the girl and took her for abortion, which almost claimed her life.

“On May 23, I left very early for my business and left her at home with my husband’s younger brother, I later received a call that she was missing.

“I went home immediately and was told that she went out to buy airtime for my brother in-law and did not return, when a search began, neighbours said they saw Lawal with another lady in a tricycle.

“I called him immediately and he picked but denied abducting her, claiming he was on his way to bring his family members.

“Several hours later, we saw her walked into the house with some difficulty and I sensed that something was wrong.

“I asked her questions and she revealed that Lawal and another woman saw her on her way to buy credit and led her to a waiting tricycle.

“She told me that he took her to a local clinic, which we later learnt was a place in Gangare Street, where some metals were inserted into her vagina,” she said.

She added that the girl began to bleed heavily and lost consciousness, which made them to rush her to a clinic owned by the Police.

Isah said it was at the hospital that she discovered that the girl had incomplete abortion, which led to heavy bleeding.

“She was induced and a fully formed fetus of about four months was evacuated from her at the Police clinic and I immediately reported the incidence to the Police and Lawal was arrested.

She, however, said that she was shocked to hear that the suspect was released on bail.

The Investigating Police Officer in charge of the case, Insp. Sabina Margai, of the A Divisional Police Headquarters, Jos, confirmed to NAN that the suspect was arrested, detained and granted bail.

According to Sabina, investigations are ongoing and the suspect will be charged to court when it is concluded.