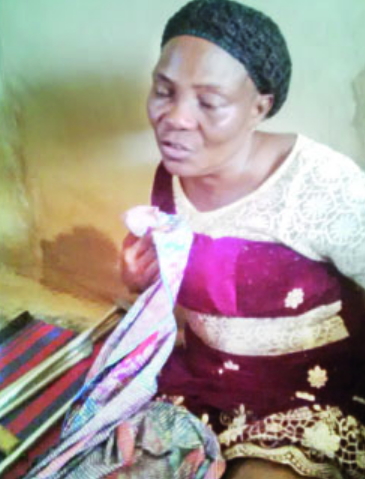 It is unending agony. Hers is the pathetic story of a Boko Haram victim, a woman who lost her husband, four children, two sets of twins, all university undergraduates, and younger brother to the 2010 bomb blast in Jos, Plateau State.

She survived the attack but now lives with a gunshot wound in her left leg, which has eaten deep into her flesh.

She sits on a mat spread at the far end of her room, with crutches by her side. The room where she squats at 35, Alhaji Muili Street, Oregun, Ikeja, Lagos, is empty, except for a bed and a few old boxes. She spends a better part of her day on the mat.

It is obvious that the woman has seen the ugly side of life from a very frightening perspective.

She looks gloomy, even as her hope dims day by day. She signals to her daughter to get a wooden bench from the corridor for her guests to sit. Tears intermittently cascade down her cheeks as she struggles to remember her days of living in plenty, the tragedy and her present loads of sorrow. Her horrendous accounts could melt a heart of stone.

Her name is Joy Musa but everything that had hitherto given her joy had eluded her in the space of few minutes, leaving her in the cruel embrace of excruciating pain. She begs to eat and acquire anything that money can buy because she has been incapacitated.

Though it is now seven years since men with evil intentions, in a commando style, stormed the Dogo Nahawa settlement on the outskirts of Jos to unleash terror on hundreds of innocent residents, Joy is yet to come to terms with how six members of her family were wiped out in one fell swoop. It was one attack that instantly changed her destiny, tormenting her in unimaginable proportions.

In a feeble and trouble-filled voice, the victim, who is an indigene of Ayangba in Idah Local Government Area of Kogi State, recently told Daily Sun in her apartment in Lagos that she wished she could turn back the hands of time to reverse the misfortunes that befell her.

The distraught woman recalled how a staccato of gunshots and explosions rent the air around 11pm on that fateful Saturday spreading panic across the neighbourhood. According to her, many parents and children fled in different directions. Like an Olympic race, her husband, Moses led their first four children while Joy shielded and escaped with the younger two. But the family couldn’t run too far as bullets flew in all directions.

How they were all killed

Life was good until the Boko Haram attack. Said she:

“I had just returned from a business trip in Cotonou, Benin Republic, to buy goods that I used to sell. I invited my two twins, Gloria and Endurance, 19, Prince and Priscilla, 16, from the University of Jos to come and collect the gifts I bought for them. They came with their schoolmate but she went back that same day while my children slept over.

“Immediately we heard the gunshots, l strapped our last born, Miracle, to my back. She was four years old. Then I held the elder sister, Gift, 7, and we started running. We saw as people were falling after getting hit. My husband saw what he thought was an escape route but as he ran towards it with four of our children, I heard the sound of an explosion and smoke immediately filled everywhere.

“When the smoke had settled down a bit, a policeman pointed his torchlight to the scene and I saw my husband’s head and Gloria’s body divided into two by the bomb.”

While she was still staring at the burnt bodies and trying to deny what just happened to her husband and their four children, a bullet struck her left leg and she fell down with her last son strapped to her back. She said she bled for almost an hour before Nigerian soldiers found and took her to Vom Hospital in Jos.

The attackers, it was gathered, also killed her brother who was a final-year student of UNIJOS.

From Vom to Igbobi

She said when the soldiers took them to Vom Hospital, government promised to take care of the victims but nobody gave them any treatment there.

She said her elder sister had to discharge her and take her to their hometown in Kogi State, where she was treated with traditional medicine. But, unfortunately, her leg began to rot from the bullet wound, until one of her relatives, Samuel Audu, brought her to Lagos for comprehensive treatment at the National Orthopaedic Hospital, Igbobi, Lagos.

“When my brother took me to Igbobi hospital, the doctors said my leg couldn’t be corrected in Nigeria except I was flown to India. They gave me another option to amputate my leg which l rejected. Then I left. Doctors said the bones were rotten. I was confined to a wheelchair.”

Good Samaritan to the rescue

While she was being wheeled out of the Igbobi premises in 2016, she said a certain Reverend Isaac sighted her and stopped. Having enquired about her predicament, the stranger handed her N20,000 and his contact number.

“By that time, we had no money left and my brother was practically killing himself trying to save us,” she said.

She said when she called the man on getting home, he informed her that he was willing to pay for whatever it would cost to cure her leg.

“We got Diasyland Orthopaedic and Trauma Hospital in Jos that could handle my leg. We informed the Good Samaritan and he immediately took me and my daughter to the airport and flew us to Jos. They did the first and second operations. The man spent millions because the first receipt after the first operation was N2.8 million. He also lodged me in a hotel,” Joy said.

Shedding tears, she said the doctors asked her to do the third operation to make her leg perfect but the man said he had exhausted everything he had.

“I am forever grateful to this man because his type of person is rare today. Now, l don’t use a wheelchair but crutches. He was also giving us money to feed then,” she said.

Joy and her husband, Moses Musa, had everything anyone would wish for to live a beautiful life. They had six adorable children, a house, cars and flourishing businesses.

Joy would travel to Cotonou, Benin Republic, and Abeokuta in Ogun State to buy clothes, bags, footwear and several other accessories to sell in Jos. She said her husband supplied agricultural products to Hausa businessmen in Mile 12, Lagos. And life was generally good.

A sick mother and hapless children

A kind-hearted Nigerian has paid for the school fees of her two surviving children but she would soon lose her apartment. The rent of the house where she is squatting has expired and the lady who rented it is not ready to renew it.

“We don’t have money. To eat is not easy for us. I am now a beggar which l never did in all my life before the disaster.

“If my governor helps with the surgery and I’m able to walk again, I will work hard to fund my children’s education. They are my only hope. I want all Nigerians to help us.

“My son Miracle and his sister Gift are still suffering from the shock. They saw how their father and four siblings were blown to pieces. Years after the attack, Miracle would wake up in the middle of the night and be crying,’ she said. 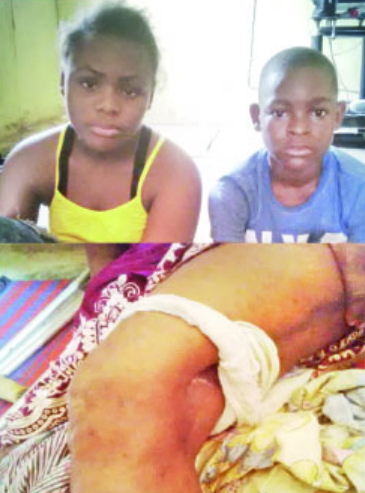 Joy praised her 15-year-old daughter, Gift, whom she said has been bathing her all these years because she has not been able to have full water baths due to the injury in her leg: “She’s the one who mops my body with wet towel. She helps me with domestic things I can’t be telling the world. Even when she should be in school, she makes sure I am fine.”

No help from Victims’ Support Fund

To alleviate the sufferings of bomb victims and to provide a comprehensive solution to the menace, former President Goodluck Jonathan inaugurated the Victims’ Support Fund (VSF) in 2014, when many kind-hearted Nigerians donated several amounts of money. But Joy accused the fund of not helping her.

In corroborating Joy’s claim, the President of the Bomb Victims Association of Nigeria (BVAN), Kayode Olatunji, told Daily Sun that the VSF was not sensitive to the plight of the victims that the billions of money realised was meant for.

“I have been following Joy’s case and I expect the VSF to take care of her but they are not forthcoming,” he said.

Gift pleaded with Nigerians to come to her mother’s aid so that she could walk again even as she thanked those who have been helping the family in one way or the other.