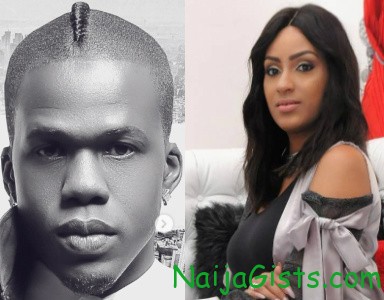 October 15, 2017 – Juliet Ibrahim Boyfriend Iceberg Slim: Why I Dropped Out Of My School Jay College Of Criminal Justice For Music

Juliet Ibrahim Boyfriend Iceberg Slim Says He’s A School Drop Out, Reveals Why He Dropped Out Of College

Why did you drop out of the John Jay College of Criminal Justice?

I decided to leave college because of my passion for music. Most of the time, when I was sitting for lectures, all I could think about was making music. I always knew I had a higher calling. It was a hard decision, but I followed my instincts.

You used to write poetry; what themes did you usually write about?

When I was writing poetry, I’d often write about the outside world as I saw it, or I’d write about life from a perspective other than mine. I enjoyed writing sonnets the most.

Why did you stop writing poetry?

I stopped writing poetry when I started writing my rap lyrics. Although in a sense, they’re one and the same.

When was the first time you knew you wanted to do music?

The first time I knew I wanted to do music was after the first song I ever recorded. After playing it for several people, the general consensus was that I was ‘very talented’ and that I should continue. At that point I knew it was my calling.

Why didn’t you decide to pursue your music career in the United States?

I didn’t want to pursue a career in the United States because I wanted to stand for something bigger. I was seen as a typical African-American aka Black guy; however I am a Nigerian. I want to be known as a Nigerian musician, not a Black or African-American musician. But in order to do that, I would have to connect with my people; my fellow Nigerians. That was what influenced my decision to move to Nigeria.

You have a wonderful relationship with Juliet Ibrahim; what was the point of attraction for you?

Juliet is an amazing woman. When we first met, I was intrigued by her peculiar choice in music. After we spoke for a little bit, I was blown away by her intelligence, ambition and kind heart.

How would you describe your relationship?

I don’t think there are words to describe the relationship. To say it’s incredible would be an understatement.