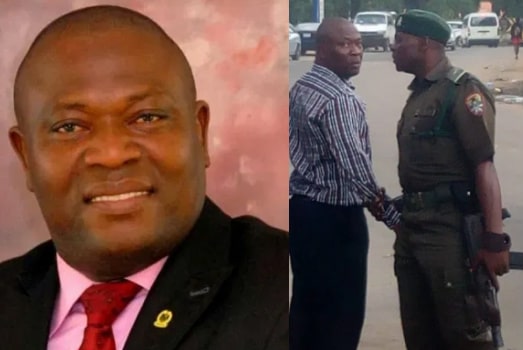 “You are conscienceless, wicked, an animal, and not fit to walk on the streets”, Justice Sybil Nwaka told convicted Chrisland School, VGC, Lekki paedophile, Adegboyega Adenekan as she handed down a 60 year-jail sentence to him.

Justice Nwaka delivered the verdict at Ikeja Sexual Offences and Domestic Violence Court on Thursday after finding 47 year-old Adenekan guilty of defiling a toddler after more than 21 months of trial.

Adenekan was arraigned on Jan. 29, 2018, on a count charge of defiling a two-year and 11-month pupil of Chrisland School, Victoria Garden City (VGC), Lagos State. He pleaded not guilty.

In a two-hour and 15-minute judgment, Nwaka said that the prosecution proved its case beyond reasonable doubt and advised schools to ensure due diligence while hiring teachers.

“Parents should not be carried away by the aesthetics of schools.

“This case may just be the tip of the iceberg as a lot of our children are suffering in silence,” she said.

The judge advised parents to be bold enough to confront teachers and school management when necessary.

“A lot of our children are suffering in silence. I advise or recommend that the education and social welfare ministries should visit schools randomly to give them a check.

“This defendant is conscienceless, wicked, an animal and not fit to walk on the streets.

“I hereby sentence Adegboyega Adenekan to 60 years’ imprisonment; this is the sentence of the court.”

Before convicting Adenekan, Nwaka said that the pupil had high intelligence quotient and could give a vivid and consistent narration of how she was defiled by Adenekan while she was wearing her school uniform.

The judge noted that the child testified that she was defiled twice by Adenekan – once in his office and the second time in a hall.

Nwaka said that the essential ingredients to prove a charge of defilement was that the defendant had sexual intercourse with a child under 11 years, and that there was penetration into the vagina.

She noted that the evidence of defilement is the same as that of rape but said that, in defilement, it is immaterial if it was with or without the consent of the child.

“Sexual intercourse can be by hand, penis, cucumber or any blunt object.

” Sexual intercourse is essentially the insertion of the penis into the vagina for pleasure, reproduction or both.

“In our present case, there is certainty of penetration. Penetration, however slight, is sufficient; it is not necessary if injury is caused or the hymen ruptured.

“Penetration was corroborated by Exhibits E1 to E3; the evidence of the victim was not unshaken as to who put his ‘wee-wee’ in her ‘wee-wee’.”

According to the judge, the convict is the only Mr Adenekan in the school.

“A medical report corroborated the evidence of the victim,” she added.

The judge noted said that the defendant admitted in his evidence-in-chief that he had contact with three children of the school including the victim, and that the other two children were withdrawn from the school.

“I totally disagree with the defence’s submission that the evidence of the victim is not corroborated.

“He confirmed knowing three children (the victim and two of her friends). These children revolved around Adenekan, and he is a recurring decimal among these three children.

“For some unknown and strange reasons, the two other children were withdrawn by their parents from the school.

“The defendant admitted visiting the children in their classroom despite the fact that it is not allowed for the defendant to visit the girl-child in classroom.

“The defendant admitted knowing the victim and said she was intelligent.

“The prosecution has, for the satisfaction of the court, proved beyond reasonable doubt, the guilt of the defendant, and the defendant is accordingly convicted,” she held.

After Adenekan’s conviction, defence counsel, Mr Richard Abdullahi, told the court that he would not plead for mercy.

“We have no allocutus (plea for mercy), we will leave sentencing to the discretion of my lord,” he said.

Addressing the court, Mr Babajide Boye, lead prosecution counsel, asked the court to hand down a stiff sentence that would serve as a deterrent to other perpetrators of defilement.

“Perpetuators of child sexual offences are very secretive. Prosecution wants to assure parents that they are never alone.

“Prosecution wants to encourage parents to always listen to their children when they talk about their experiences and encounters with perpetrators.

“My lord, from my experience as a prosecutor of sexual offences, children, especially those of tender years, do not tell lies.

“We, therefore, want to encourage parents to speak out more; they should not cover up because the effects of abuse are devastating on survivors,” he said.

After the court passed the sentence and rose, Adenekan, while still in the dock, shouted: “Glory be to God”, three times.

As he was led away by a prison officer, he said:

“God, You know I am innocent; I hand over this judgment of the court to you. Praise the Lord!”

During the trial, seven witnesses including the pupil and her mother testified for the prosecution which closed its case on March 14.

Five witnesses, including the convict and the head teacher of the nursery arm of Chrisland School, testified for defence.

Defence closed its case on June 26.

The prosecution had submitted that Adenekan committed the offence sometime in November 2016 at Chrisland School, VGC, Lagos, when he defiled the toddler by having unlawful sexual intercourse with her, in contravention of Section 137 of the Criminal Law of Lagos State, 2011.

The section provides for life sentence for anyone convicted of defiling a child.