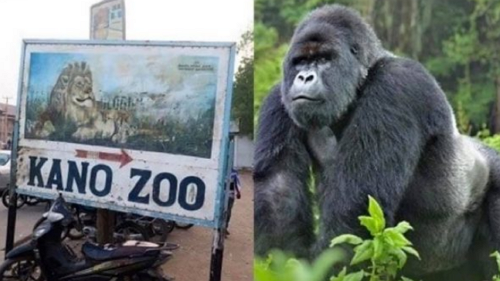 Over one year after a spiritual snaked swallowed a huge sum of money at JAMB officer in Makurdi Benue state, another animal has been accused of doing same.

An accounts officer at Kano Zoological Gardens claimed that a gorilla sneaked into an office where the money was kept and then proceeded to ‘swallow’ 6.8million Naira.

Interestingly, this is not the first time an animal has been bizarrely blamed for missing money in Nigeria. A February 12, 2018, report said: “A sales clerk, Philomena Chieshe, told JAMB registrar and his team that she could not account for N36 million she made in previous years before the abolition of scratch cards. In the course of interrogation, Philomena denied the allegations that she stole the money but confessed that her housemaid connived with another JAMB staff, Joan Asen, to “spiritually” (through a snake) steal the money from the vault in the account office.” The cash disappearance happened at the Joint Admission and Matriculation Board (JAMB) office in Makurdi, Benue State. The management didn’t believe the sales clerk’s story about a money-swallowing snake.

In Kano, the state police command spokesman, Abdullahi Haruna Kiyaw, was quoted as saying: “Yes, it is true that money from five days of Sallah festivities is missing from the Kano zoo. As at now, we have arrested 10 members of staff of the zoo including the security man and those working in the finance unit.”

Which animal may be blamed for missing money the next time?