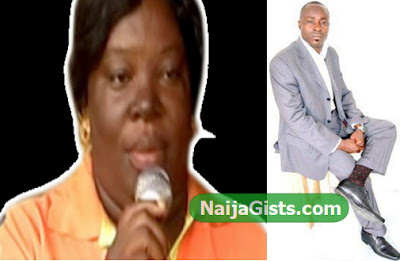 Actress Foluke Daramola allegedly snatched Kayode from his matrimonial home after an encounter at a restaurant in Omole Estate.

To cut the long story short, the woman who introduced Kayode to Foluke Daramola, Princess Bukola Fasuyi has confessed. If you missed her confession, read it here

In this recent interview culled from e-247, Kayode Salako’s wife, Olubukola has finally spoken up.

Read the interview excerpt below

What is your reaction to the stories going viral online on your marriage?

Yes, one thing about me is that in as much as that the news going round I don’t have anything to say, I’m the kind of person that allows God to do his work, I will not help God to do anything, God is doing his work . Whatever God feels He wants to do is what He should do. All that’s happening now in the media is just God doing his work. I will allow God to do His work and I will not say anything. I will just allow BABA to do his work.

The lady who claimed that she introduced Foluke to your husband is ready to apologise for breaking your home.

It’s only God that can forgive. The deed has been done. Even if she comes to apologise to me now, how would she apologise to the children? The children have gone through many things; I’m not talking about finances, I’m not talking not about money now but psychological. Forgiveness is in the hands of God. Imagine if God has not been behind me in this matter and somewhere along the line, something unfortunate had happened to me or one of my children had been consumed by the circumstance. Would she have come to apologise to me? Her forgiveness is in the hands of God.

Prior to this raging issue, what kind of home or husband did you have?

I don’t want to say anything positive or negative about anybody. I don’t want to talk about anybody in any interview; I’m not going to do that. I stand on one thing and I know that I serve a living God that will judge the four of us, and that includes Kayode, Foluke, Bukola and I, each according to his or her role. I leave the four of us in the court of God and I know He will give to each of us the judgement we deserve.

Whaoo this woman has a lot on her mind….

May baba fight for you oooo Pastor Olubukola Salako.