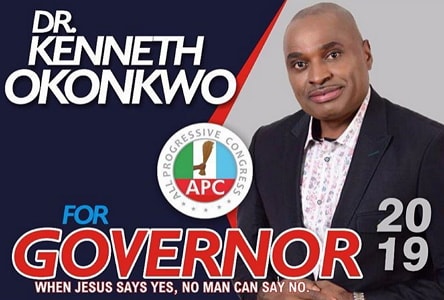 What projects are you working on now?

I am trying to be the governor of Enugu State. That is the project I am working on now. I am trying to contest for the governorship of Enugu State under the platform of All Progressives Congress (APC). Then of course, I am a movie guy, so there must always be a movie on ground and we are also trying to remake Living In Bondage so that I will finally break free.

What inspired your political ambition?

That is because we are in democracy and democracy should be for everybody. Everybody might not be in power at the same time but everybody should be in politics because you should decide what should influence your life. The leadership of any nation influences the life of everybody and so everybody should be in politics. However, I have been politically active throughout my life. From my university days, I was the Secretary General for the Society for the Advancement of Business Management. When I was at the University of Lagos doing my masters, I was the president of the Society of International Law and Diplomacy. So I have always been in politics and like I said earlier, I do the things that I am passionate about and that’s why I come out with determination.

What came to your mind when you were contacted for the remake of Living in Bondage?

What came to my mind was that they want to repackage what started Nollywood and fit it in to the modern environment of movie world and I thought it was fantastic because a lot of people were not born 26 years ago.

Do you think movie lovers will get what they got from this movie 26years ago?

Well, if you get what you got 26years ago, then we have done nothing. We are saying that you will get at least five times better than what you got then and I have told you that I have gotten at least five times better than I was then. So, you are going to get a better story. A lot of things we did then we were in shadows but now a lot of them are going to be in substance. You will get something fantastic, something explosive, something beautiful, something that is going to be the 21st century Nollywood because we did the first one in the 20th century.

What are the things you consider before accepting a movie role?

I consider first and foremost the story. There has to be a strong message. I rate my story into three; one, it is beyond redemption (the plot is bad, the dialogue is bad.) I won’t even look at it. Two, the plot is fantastic, the dialogue is not good, I can look at that; if they are going to give me the freedom to remold it, it is redeemable. When we started Living in Bondage, it was in a plot form, so we have become used to being able to remold a good plot, even if it doesn’t have good dialogue but I’m going to take that one conditionally.

Then the third one, the plot is good and the dialogue is fantastic. That one, I do not even want any actor to change anything without permission because it’s just beautiful so that one I will accept it and even in that one, I am ready to make concessions even in terms of price because I will be enjoying it without doing much. So I consider the story, the cast and crew, the costume, the makeup. I don’t mind working with new artistes but they have to be good because we started it and I cannot discriminate against new artistes. I don’t have that mentality of ‘it has to be an old artiste’. That is why most of my movies bring out new artistes but the person has to be good. The person that brought me out through Living in Bondage, I never met the man before then.

I also consider the role. The role has to be good. People want to feel my impact. If I come into a movie and I’m done in two scenes they will be like they are duped. I remember one movie I made that I died in the first scene, so one artiste that acted with me said she had problems convincing the brothers to sit down and watch the remaining because they were like Kenneth Okonkwo is dead now, what else are we watching? And I am also interested in the payment.

You were 24 when you acted in Living in Bondage and it is 26 years after and you are still very much active in the movie industry. Have you ever lived a normal life?

I thought I was going to have a normal life. By my nature, I just want to be me but I am sorry it’s not just possible. I will give you an instance that really proved it’s not possible anymore. Somebody drove very roughly and I had to drive to counter the roughness and park right in front of him to stop him; then I thought the guy was going to come out but he just came down and was knocking on my glass laughing, looked at me and said ‘if I’m crazy, are you supposed to join us in the craze?’

It taught me a lot of lesson because he wasn’t arguing that he was crazy, but this is a man he was looking up to as a model. That means if he is crazy he should be looking at this kind of a man to stop being crazy, but look at this man that has come to his level. So I was ashamed of myself there and I resolved, okay, I am now living my life because some other people are looking to take their bearing. So even when they start getting crazy, I should not be crazy.

We’ve seen some celebrities vying for top political positions but have failed… what are your fears?

I have no fear. The slogan is: ‘When Jesus says yes, no man can say No.’ I am going to win by the grace of God if everything is down the way it is supposed to be and I know it will. You may just be talking to the next governor of Enugu State. I have no fear.

Will you leave acting for politics?

Thank God acting is a job. One politician in Enugu State said one of his conditions for supporting me is that I must continue acting because he is my fan and the beauty of acting is that it does not have any retirement age. So I am an actor. I cannot say I will never leave it because ‘Never belongs to God.’ So it depends on the will of God but just know that I am an actor for life.