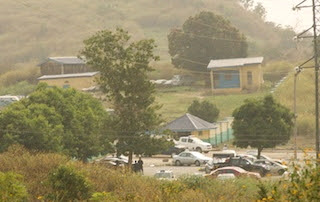 The Nigeria Police has confirmed that 30 suspects in its detention were freed by gunmen who attacked the premises of Special Anti-robbery Squad, Abuja on early on Monday morning. But Chief Superintendent of Police Frank Mba, Deputy Force Public Relations Officer in a statement on Monday in Abuja said 25 of the suspects have already been re-arrested. He also said none of the escapees is being held for terror charges.

The Police also failed to confirm speculations that two of its men died during the attack in the media statement.
The full statement reads:

“In the early hours of today, 26th November, 2012, at about 2am, unknown gunmen in large number attacked the premises of the Special Anti-Robbery Squad (SARS) of the Federal Territory Police Command.

“Policemen on duty responded swiftly and engaged the gunmen in a gun battle that lasted for some minutes, at the end of which the gunmen were successfully repelled.

“However, in the confusion that ensued, about 30 suspects in the detention facilities of SARS broke out of the cells and attempted to escape.

“Tactical and coordinated efforts to re-arrest the fleeing suspects yielded instant result. So far, twenty five (25) of the suspects have been re-arrested, while five (5) suspects originally being held in relation to robbery related offences are currently at large.

“It needs to be emphasized here that no suspect held for terror related charges, escaped from SARS detention facilities. No explosive or IED-related materials were used in the botched attack.

“Meanwhile, the Inspector-General of Police, IGP MD Abubakar, CFR, NPM, mni has personally visited the scene of the incident to assess the situation.

“ He has equally ordered a high-powered investigative panel headed by a Senior Police Officer to investigate the circumstances surrounding the incidence.

“Similarly, the IGP has ordered water-tight security around all government and Police related facilities nationwide.

The Police High Command uses this medium to appeal to Nigerians for calm while reassuring them of the Force preparedness to perform its constitutional and statutory responsibilities of providing adequate security for the State and the entire citizenry.

“The Force therefore, enjoins the public to continue to go about their lawful duty without fear or intimidation as adequate strategies have been put in place to guarantee the general security and safety of all Nigerians”, MBA concluded in the statement. (Source)