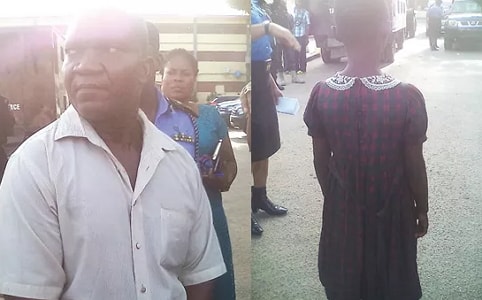 The founder of the Christ Abiding Church, located at the Somolu area of Lagos State, has been arrested for allegedly defiling a nine-year-old girl. The GO, Pastor Udoh Okon 54, was alleged to have been having carnal knowledge of the girl since last year.

The secret was blown open after the girl’s mother noticed that the girl was beginning to act strange. Then on April 13, the mother of the victim was said to have noticed a substance suspected to be semen, dripping from the victim’s private parts while she was sleeping.

The shocked mother woke her up and questioned. The girl mentioned Pastor Okon. Okon, who spoke with journalists, denied having sex with the girl. Speaking with journalists, Okon said: “Late last year, I saw the mother of the victim punishing her.

I told the mother to stop it. I told her that even if she wanted to punish the girl, it shouldn’t be in the public. I urged her to wait until they get home. It was in that process her mother told me somebody had sexually defiled the girl.”

Okon continued: “The victim usually comes to my shop where I sell drinks to assist me. But after my intervention that day, I started sending her away from my shop whenever she comes around. I believe it is my enemies that are using the mother of the girl against me.”

Okon, who said that he was ready to take an oath, to underscore his innocence, thundered: “If I had ever had sex with the victim, let me not die well! Let me die mysteriously! I took the girl like my grandchild. How can I defile my granddaughter? God should punish me and denied me heaven if I had ever had sex with her. The parents of the victim know those that defiled her.

They are covering up and implicating me.” When asked if he had disagreement with the victim’s parents, he replied: “No! But I know they only want to destroy my reputation. Everybody in the community knows I’m a man of God. I have pastored my church for over 30 years. I didn’t assault women in my church, what then do I stand to gain by sexually assaulting a little girl?”

The Lagos State Commissioner of Police, Mr. Edgal Imohimi, said the victim’s mother noticed the defilement when her daughter started behaving strangely. The CP added: “The victim revealed that the pastor’s defiled her in his wife’s shop at Bankole Street, Famous Stop, in Somolu. During interrogation, the suspect denied the allegation.

“Investigation into the case is still ongoing. I urge parents to keep an eye on their children. The command will not hesitate to arrest negligent parents and prosecute them in accordance with relevant section of the law, particularly Section 247 and 249 of the Criminal Law of Lagos State, 2015.”