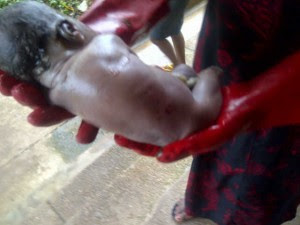 Ms Oyinlola Rotimi, the 400-level Agricultural Extension and Rural Sociology student who was accused of attempting to flush her baby down the toilet at Moremi Hall in Obafemi Awolowo University, Ile-Ife last week is speaking up for the very first time.

The 22-year-old first time mother who hails from Ijabe, a town located between Kwara & Osun states said she is not embarrassed about the whole thing.

In a tell-it-all discussion with the Punch, Oyinlola said she purged all night before her birth in the morning.

Hear Oyin in her own words;

“Why would I flush or kill my baby after going through the pains of carrying him for about good nine months ? I am not heartless and I thank God for my life and the safe delivery. I know God has the best plan for me and my baby. I seriously appreciate the cleaners for their assistance because I got here (health centre) before I understood everything that happened to me. I am happy that I am alive and my baby is alive too. I’m also using this opportunity to thank the VC, the doctors and nurses, my lecturers and everybody because they all stood by me. They all became my father, my mother and everything to me. Right now, I can call myself a celebrity and definitely I’m going to be greater than a celebrity. My baby too is going to be great. Look at the circumstance that surrounds his birth, just some days old, he is already all over in the news around the world and everybody is happy to see him or hear about his story. He will surely go beyond where I am now. He has turned me into a kind of celebrity. ”

“I was purging all through the night and I had no idea of what labour pain was all about. Actually, I was feeling pressed, I can’t call it a labour pain because I was visiting the toilet all through the night till that morning. I just went to the toilet to go and purge when I noticed something just came out of me which I found out was the baby. The baby entered the closet. I was just there shouting, bleeding and people who saw the blood came out to help me alongside the baby. I was really scared ! I was not expecting a baby. I went to the toilet but seeing a baby was terrifying because I was not expecting him or her to come out yet. It is absolutely not true that I took to my heels when people came to help me. It happened in Moremi Hall toilet and the toilet is a public one where everybody takes their bath, fetch water and clean up. So, some people were around fetching water, having their bath as usual, while I was in the toilet planning to defecate. My friend called the cleaner for help because she was an elderly woman. I was very scared and people around too couldn’t help because we are all young female students. The cleaner later helped to carry the baby out and brought it to the Health Centre along with me.”
Her plan for the baby

“I will continue to keep him more handsome, healthier and nurture him to attain greater height in life. But what he will become later in life is not for me to decide but he will definitely become what God wants him to become. I will just try to train him in God’s way and I am sure His (God) plan for his life will be realised.”